Nationals 3, Mets 0: Mets' Bats A Perfect Fit For DC, Get Nothing Done

Share All sharing options for: Nationals 3, Mets 0: Mets' Bats A Perfect Fit For DC, Get Nothing Done 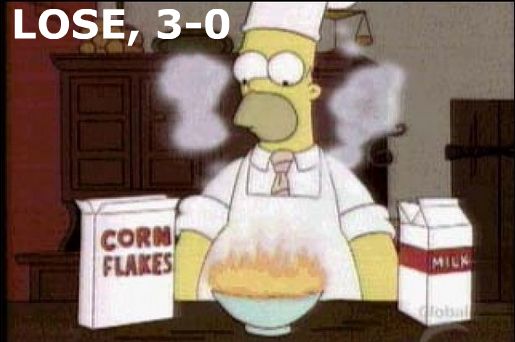 All you can ask for is a chance.

The Mets' offense was rubbish all game long, but R.A. Dickey and the bullpen held the game close enough to give the dormant bats a fighting chance in the ninth. David Wright led off with a walk, and after Angel Pagan struck out on four pitches, Jason Bay flared one to right to put two on with one out and bring Lucas Duda to the plate as the would-be tying run. Duda, a rookie with little experience at allowing suspense to build, swung at the first pitch and flied out to right for the second out.

Josh Thole, hardly a threat to tie the game with one swing, kept things going with a grounder up the middle which loaded the bases and brought up former National Willie Harris with an opportunity to do some damage. And damage he did do! Though, not to the Nationals, but rather to the Mets' fleeting hope of postponing defeat. On a 1-2 pitch, Harris took a back-door slider for strike three, ending the game and, pending the result of the Braves-Marlins game, knocking them seven-and-a-half games back in the Wild Card race.

The game was really decided way back in the first inning, when Dickey momentarily let his guard down and the Nats took proper advantage. Rick Ankiel singled to center and Ian Desmond promptly and inexplicably bunted him to second. Ryan Zimmerman then flied out to center for the second out, but a wild pitch sent Ankiel to third and a walk to Michael Morse placed runners at the corners for Jayson Werth, who is hitting every bit as poorly as Jason Bay with a contract that is for many more years and for far more money.

Not at all surprisingly, Werth took a 3-2 Dickey offering and made a mockery of the center field wall at Nationals Park, launching it far beyond the reach of Angel Pagan and giving the Nats a 3-0 lead, which lead they would hold through an underwhelming Mets offensive "attack" over the next seven innings.

Overall, the Mets were just 1-for-6 with runners in scoring position, left nine men on base, and managed eight singles and no extra-base hits. What can you do? Good offensive teams — and yes, the Mets are a good offensive team, believe it or not — have bad games even against crummy pitchers. This was one of those games, so you move on and hope for better times tomorrow.

Jon Niese takes on Jordan Zimmermann at 1:35pm EDT Sunday in the final game of the series. 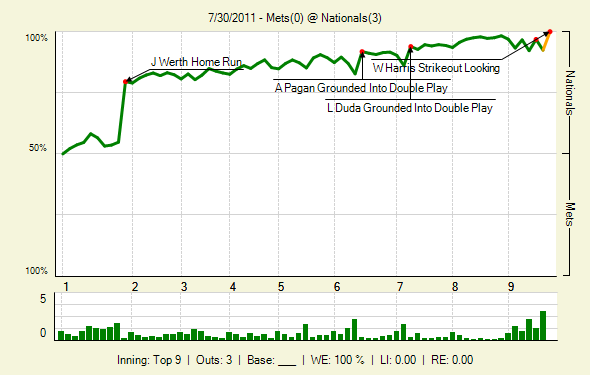