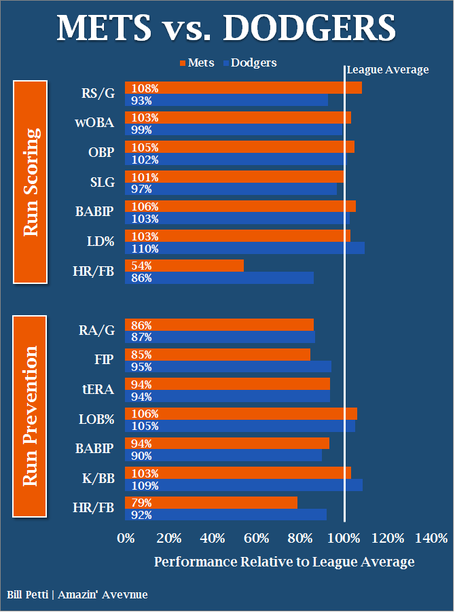 LA has just had a dreadful season. Besides the off the field circus that surrounds the club, the team simply cannot score. The Dodgers runs per game stands at 7% less than league average. After MVP candidate Matt Kemp (.447 wOBA, 1.035 OPS) there simply isn't a whole lot to scare opposing pitchers in this lineup.

The Mets are coming off a 6-4 stretch where they played 3 first-place teams from the AL. Their offense is still putting up runs on the board (8% better than league average), which is bailing out the still unreliable run prevention (14% below league average).

Even with the quick turnaround and coast-to-coast travel I'd say the Mets have a good chance to win this series. However, that changes if Jose Reyes and his hamstring end up taking a few days off. Reyes is responsible for 19% of the Mets' runs created (more on this tomorrow), so without him in the lineup the scoring edge could dry up pretty quickly.