Jose Reyes, MVP. I Am Serious, And Don't Call Me Shirley

Share All sharing options for: Jose Reyes, MVP. I Am Serious, And Don't Call Me Shirley 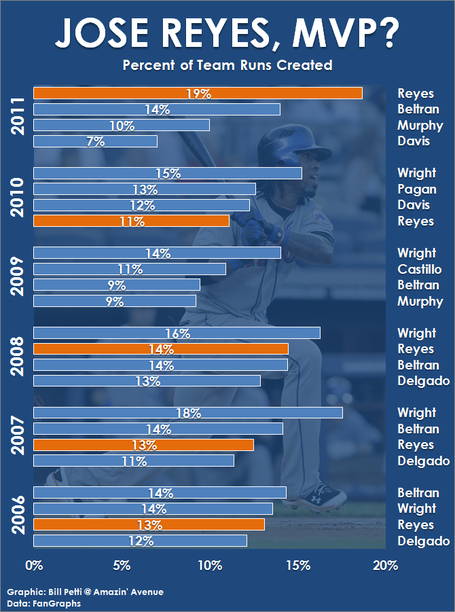 A great deal of ink is being spilled this season discussing the offensive supernova that is Jose Reyes. That fact that Reyes is in a walk year, and plays in New York, only exacerbates the interest in his performance.

No one can honestly argue that Reyes hasn't been among the very best position players this year. Despite only hitting three home runs, Reyes has a .397 OBP, .527 SLG, and a .408 wOBA. Oh, and he's second in fWAR (5.3), bested by some guy who pulls the ball a lot up in Toronto.

So he's been good, no question. But has he been the National League MVP to this point in the season?

Let's leave aside the question of whether he can repeat his torrid pace in the second half of the season (a question made murkier by his hamstring issue).

Well, he's been the Mets' MVP, without question. The graphic above shows the percent of team runs created by player for each year since 2006. As you can see, Reyes is driving the Mets offense more than ever. And this is an offense that is currently 4th in the NL in runs scored. Reyes has accounted for 19% of those runs, 5% more than the second most productive Mets, Carlos Beltran.

But does that make him the MVP of the NL?

While not entirely about offense, the MVP is generally awarded to a player that records a fantastic season at the plate. To that I'll add that the player's performance should have contributed the largest percentage of runs created to their team and the greater the difference between their contribution and the next player on their team, the better.

For comparison's sake, here are the top run creators in the National League in terms of percent of team runs and the difference between their performance and the second best player on their team:

Reyes ranks 2nd with Prince Fielder in terms of percent of team runs created and is tied for 2nd in terms of the gap between himself and the next most productive player on his team.

Matt Kemp and Andrew McCutchen, both having fantastic seasons, have the largest gap in terms of percent of runs created and teammates. But the Dodgers are in last place in the NL West and have only scored 321 runs. As for the Pirates, McCutchen has absolutely kept them afloat offensively.

That said, I'll still take Reyes as NL MVP to this point. Why? Because I am a Mets fan, that's why. Well, okay, I can do a little better than mere blind allegiance.

Kemp is the Dodgers clean-up hitter and his hit 4th all year. As such, he's expected to be one of the team's top run creators. Moreover, his 4.5 Wins Above Replacement is almost a full run less than Reyes' 5.3. Kemp also has a higher K% than Reyes and has a less than 1.0 BB/K ratio. Finally, Kemp plays a premium defensive position and frankly isn't a good defensive center fielder (-17.3 UZR/150).

McCutchen has split time between the 3-hole and lead off for the Pirates. For me, this makes his case stronger than Kemps as he's not only produced runs in a role where that is expected (hitting third), but also from the lead-off spot. McCutchen is also a better defensive player, posting a 13 UZR/150 in center field this year. However, his WAR is even less than Kemps and he also has a worse K% and BB/K ratio than Reyes.

Reyes has contributed 19% of the Mets runs while hitting entirely from the lead-off spot. That's insane if you think about it. He has 5.3 WAR, best in the NL. And without his offense the Mets would be no where near the .500 mark, especially when you consider they are competing right now without David Wright (who, given the graphic above, has really been their run creating leader since 2006) or Ike Davis. He's also been a better base runner compared to either McCutchen or Kemp. And even though Reyes defense has declined a bit over the past few years, he's currently posting a 5.1 UZR/150 at one of the most important defensive positions in all of baseball.

In the end, it's really hard to say that one player is the MVP. All three of these players could easily earn that title and you could hardly argue that they would be controversial choices. For me, I'll go with Reyes. He's kept the Mets afloat offensively with his bat and base running, and, given the state of their pitching, it's been the offense that's kept them at the .500 mark. And it's all been done out of the lead-off spot, which to me is the most amazing part of it all.