Share All sharing options for: Wright and Beltran Were National League's Stars in 2006 All Star Game

All the way up until Yadier Molina's decisive two-run home run in Game 7 of the National League Championship Series, 2006 was one hell of a ride for Mets fans. After flirting with a wild card bid briefly in August the year before, the Mets had crashed and burned in September, but they burst onto the scene in 2006 and almost never looked back.

By the time the All Star break came around, the Mets had cemented their status as the top team in the National League East. At 53-36, they were twelve games ahead of the second place Phillies, and they were about to send a franchise-best six players to the All Star Game on July 11 at PNC Park, home of the Pittsburgh Pirates.

The National League’s starting lineup featured three Mets: Carlos Beltran in center field, David Wright at third base, and Paul Lo Duca, acquired between the 2005 and 2006 seasons from the Marlins, behind the plate. Future Met Jason Bay was in the starting lineup that day for the NL, too.

As for the other three Mets at the time, Jose Reyes, Pedro Martinez, and Tom Glavine all made the team but bowed out of the game. Glavine was replaced on the roster by another future Met: Chris Capuano.

The game turned out to be a close one. After Vladimir Guerrero hit a solo home run in the top of the second inning to put the American League up 1-0, the Mets’ highlight of the game came in the bottom of the inning. With loathed former Met Kenny Rogers on the mound, David Wright hit a solo home run of his own to tie the game. It was Wright’s only hit in three trips to the plate, but it was a big one. 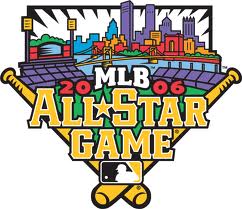 The score still tied in the bottom of the third inning, the Mets were once again involved in scoring a run. Alfonso Soriano was at second base when Beltran singled to center field, but Soriano was thrown out at the plate. Beltran took second base and the throw, stole third base on the second pitch of Albert Pujols’ at-bat, and scored on a wild pitch by Roy Halladay. That was the last run the NL would score. Beltran wound up going 2-for-4 in the game, playing all nine innings in center field.

The score stayed that way until the ninth inning, when Trevor Hoffman came on for the NL, got two quick ground outs, and then gave up a single, double, and triple that put the AL up 3-2. Beltran was the only NL hitter to reach base in the bottom of the inning, on an error, but Ryan Howard and Carlos Lee made the last two outs of the game.

The rest of the National League didn’t do much that night, but the Mets shined, much like they did for all of the regular season.