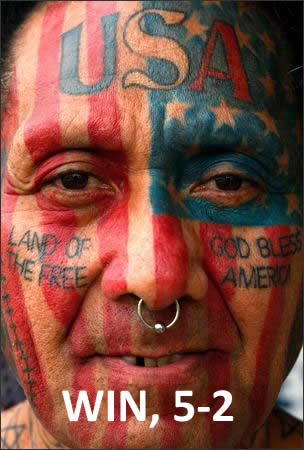 Much like those ragtag colonial militias lo those many years ago, the odds seemed stacked against the Mets early in this game.* For the first few innings, Chris Capuano showed an almost Mike Pelfrey-ian inability to put batters away. He seemed particularly rattled by the strike zone of home plate ump Sam Holbrook (though he was the only one so bugged), and the specter of James Loney, owner of a whopping .378 coming into the game. In the second inning, Capuano nearly escaped unscathed from a Matt Kemp leadoff double, thanks to a sac bunt and a strike out of Aaron Miles, but he gave up a two-out RBI single to James Loney on an 0-2 count. In the fourth, Capuano put runners at the corners with no outs, and again allowed an RBI single to Loney, this one coming on an 0-1 count, to put the Mets in a 2-0 hole.

* The colonists' struggle for independence is in no way like an early July matchup between the Mets and Dodgers. I should be ashamed of myself.

However, it looked like the Mets' biggest problem was not their pitchers, but the opponent's. Rubby "It's Pronounced 'Ruby'" De La Rosa made short work of the Mets bats, helped in large part by those bats' willingness to swing at everything he threw. Through the first five innings, he allowed only a two-out walk to Carlos Beltran in the fourth and expended only 51 pitches to do it. The specter of the first Met no hitting since the Astros' Darryl Kile in 1993 loomed large, as no Met batter looked remotely comfortable (or patient) against De La Rosa to that point. Not to mention the team's traditional struggles against rookie hurlers, a tradition that goes back almost as far as 1776.

But in the sixth, De La Rosa turned back into a pumpkin. Ruben Tejada pulled the "not tonight, boss" in the top of the sixth by fouling off a few tough pitches, then hitting a clean single to left. After a typically awkward sac bunt from Capuano, Angel Pagan lined a ball off of the culprit Loney's glove at first that allowed Tejada to score and Pagan to go all the way to second with a "double." De La Rosa became a bit unraveled as a result. With two outs, Beltran hit a ball to virtually the same spot that rolled down the right field line and drove in Pagan with the tying run. Shortly thereafter, Daniel Murphy played copycat with yet another double to right to give the Mets a 3-2 lead.

After De La Rosa navigated a scoreless seventh, the Mets tacked on against LA's bullpen in the eighth. Pagan hit a leadoff double against lefty Scott Elbert, and beanball magnet Justin Turner took first after getting hit in the foot while trying to bunt. The Mets were nearly turned aside when Beltran hit into a fielder's choice and Murphy hit a fly ball to shallow left, not deep enough for Pagan to tag and score from third. But the Dodgers turned to righty Matt Guerrier, and Bay blooped his first pitch into center field for an RBI single. Lucas Duda followed that with another single that brought home Beltran and expanded the Mets' lead to 5-2.

Capuano got through the bottom of the sixth unscathed, though he gave up a few long outs along the way. One of them was a long fly to deep left field that Jason Bay ran down, in a play eerily reminiscent of the one that induced his concussion around this time last season. (This time around, Bay's impact with the outfield wall was much less severe.) Bobby Parnell took over iand dispatched the Dodgers in order in the seventh and eighth with two strikeouts, both looking. Frankie Rodriguez gave up a leadoff double to Aaron Miles to open things in the ninth, but retired the next three Dodgers to seal the win (and the inevitability of his vesting option for 2012).

It was a hard-fought win, one I'm sure George Washington himself would have appreciated if he knew what baseball was. The Mets are 2-0 when Jose Reyes' status remains unsettled. I don't want to rush him back before he's ready, but I'd rather not test their ability to win without him much longer, either. 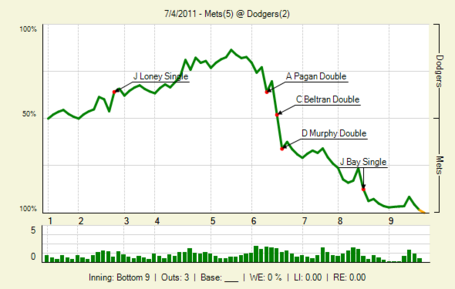