Mets 6, Dodgers 0: Bay, Beltran, Pelfrey; The Way They Drew it Up

Share All sharing options for: Mets 6, Dodgers 0: Bay, Beltran, Pelfrey; The Way They Drew it Up 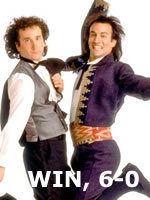 That was one of those games you don't think will work out when you're right in the middle of it. It was almost two games.

In one, Mike Pelfrey keeps putting guys on, and the defense keeps making gaffes, and there seem to be runners in scoring position every inning. You wonder if there's any way the team can survive with a one-run win.

In that game, you wonder about Pelfrey most. You might call it timely ground balls if you want to give the pitcher credit. In the third, Pelfrey let Ted Lilly break up the no-hitter and then the light-hitting Tony Gwynn Jr. (not Sr) singled to shallow center. Angel Pagan airmailed the throw home and missed the cutoff man, but then Pelfrey got the groundball magic from Rafael Furcal and Aaron Miles. In the fourth, he allowed a double to Juan Uribe, hit an Aussie, and walked A.J. Ellis. Thanks to the National League, a Ted Lilly groundout saved his behind. Now, technically the out that rescued him in the fifth (off of Juan Uribe's bat) was a fliner liner (or a fliner fliner), and was not a ground ball.

Still, the point is he got out of these innings after allowing pitchers to hit doubles and emo-ridden shortstop/utility guys to line fliner liners. You can call it grission, or luck, or heart. Pelfrey still did it. On two walks, two hit batters and two strikeouts. And nine ground balls against eight fly balls. Masterpiece. Pelfrey still did it.

In the other game we saw last night, there was a power bust out that couldn't help but make you think about the future with a smile. If only that guy and that guy can hit home runs all year, maybe the team will have a shot.

That guy #1 was Jason Bay, who hit his fifth and sixth home runs of the season. He also notched his third multi-hit game in his past ten and extended an eight-game hitting streak. He's hitting over .300 in July!

You hear that the Dodgers have a pitcher-friendly home park, you check a few places, and you believe it. You can even look at StatCorner and see that right-handed home runs are suppressed 9%. But jeez, left-handed home runs are encouraged by 16%. And wOBA is only down 2% and 5% from each side of the plate. And, as a Mets fan, you might look down the power alleys and see only '375' and scoff. This is no pitcher's paradise, unless the weather is a major factor that doesn't quite show up in the numbers.

Bay's second home run, in the eighth, wasn't the biggest big fly ever. It barely cleared the fence in the power alley in right, where it's 375 in LA and much further in Citi. But that's just appearances or something. Bay still did it.

Carlos Beltran's two-run home run in the fifth inning came after Angel Pagan picked a poor moment to steal second and was mostly thrown out on a pickoff until Aaron Miles dropped a funky ball from James Loney. Call it a oh-no-yeah-wait-no-oh-yeah play, and one of Angel Pagan's specialties perhaps. The home run itself would have been a home run anywhere, but it would have been a solo jack without the well-timed error. Just like Angel Pagan's airmailed throw didn't turn out to be a big deal, he managed to be productive despite some gaffes. Pagan still did it.

If you look carefully, there's a whole different game recap in here. In that story, Mike Pelfrey was a gamer and gutted it out. And the Mets won despite some bone-head moves by Angel Pagan. And that Jason Bay has found his power bat and all is well again in the world. It's all a matter of perspective. Doesn't matter, they still did it. 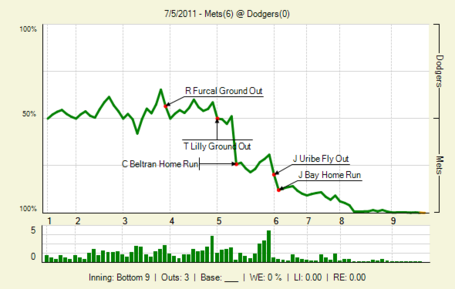