Checking in on the Pace of the Mets' Pitchers

Share All sharing options for: Checking in on the Pace of the Mets' Pitchers

Last November, Fangraphs started posting data about the amount of time a pitcher took between pitches, a new category known simply as "Pace." I took a look at the pace of each of the Mets at the end of the year to see who was working quickly and who took seemingly forever to throw his next pitch.

There's no correlation between pace and performance, but some guys certainly move the game along while others slow it down. What fans notice the most is undoubtedly how a pitcher performs, but every once in a while, someone like Steve Trachsel comes around and combines an extremely slow pace with poor performance and puts everyone to sleep. 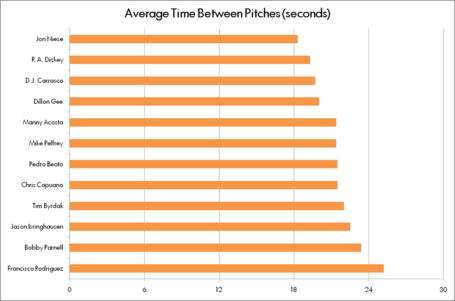 There are three groups here: the fast, the average, and the very slow. The pitchers who generally throw at the end of the game take a whole lot longer than those who throw early in games. If you like a pitcher who gets the ball and throws his next pitch as quickly as possible, Jon Niese and R.A. Dickey are your guys. If you enjoy drawn-out at-bats, Francisco Rodriguez is a master, even though he's actually a bit quicker between pitches this year than last year.