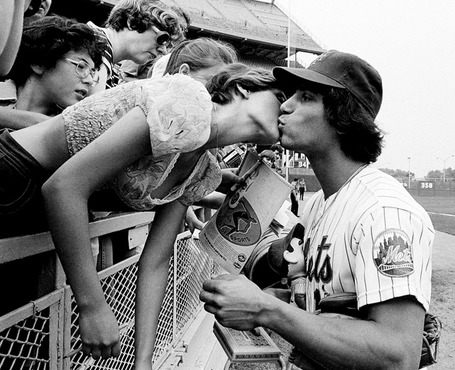 Few players, places, and times fit together more perfectly than Lee Mazzilli did at post-Seaver era Shea. He was a thoroughly New York matinee idol of the thoroughly late 1970s variety. You can easily picture him strutting down 86th Street under the el with a leather jacket on and a paint can in each hand, or getting waved through a velvet rope at Studio 54 to go party with Bianca Jagger and Truman Capote.

Incidentally, he also played outfield for the Mets. The Brooklyn native and eight-time junior speed skating champion was a baseball phenom at Abraham Lincoln High School (alma mater of such luminaries as Mel Brooks, Marv Albert, Arthur Miller, Neil Diamond, and, last but not least, Turtle from Entourage). The Mets selected him 14th overall in the 1973 draft, and he literally sped his way through their farm system; in 1975, he set a franchise record (and possibly a professional baseball one) by swiping seven bases in one game. By 1976, he'd broken into the bigs and the adoring hearts of many a female Met fan.

Mazzilli's numbers never quite lived up to the hype or potential, but he was the Mets' sole box office draw when they desperately needed one. In 1979, the Mets were suffering through a season almost unparalleled in team history in terms of pure awfulness and utter lack of hope for the future. It was a disaster of a year that makes their current woes pale in comparison

This was a time in when the ownership of the DeRoulet family came up with such brilliant innovations as employing a mascot named Mettle the Mule (an actual pack animal who brought baseballs to umpires) and trying to reuse batting practice balls during the game to save money. General manager M. Donald Grant, whose pettiness and cheapness drove Tom Seaver out of Queens, made it abundantly clear the Mets would take no part in signing free agents of any kind; it was dirt-cheap farm system products or nothing at all. As a result, the Mets weren't really a major league team, though they were technically made from real baseball parts. Unsurprisingly, fans stayed from Shea in droves, leading to a dismal attendance of less than 800,000 for the year. (Check out Greg Prince's assessment of 1979 here, alongside a look at another hideous Mets campaign, 1993.)

It seemed a cruel joke to select anyone associated with this team to the 50th All Star Game held in Seattle; to do so would be fulfilling the most technical of technicalities. But amid this mess, Mazzilli distinguished himself with the bat just enough to become the team's sole representative and go out west as a reserve outfielder. (Later, John "The Dude" Stearns would join him on the bench, thanks to the absence of fellow catchers Johnny Bench and Ted Simmons.)

This game was played in the charmless inverted coffee can of the Kingdome, and it came amid a streak where it seemed the National League had won the last 50 midsummer classics in a row. So even as the AL held a slim 6-5 lead after seven innings, it seemed only a matter of time before the Senior Circuit came back.

That time came in the top of the eighth, when NL manager Tommy Lasorda sent Mazzilli to pinch hit for Garry Matthews against the Rangers' righty reliever Jim Kern. Mazzilli, who would never hit more than 16 longballs a season in his career, took a Kern offering deep the other way. It was just fair enough and just far enough to clear the left-field fence for a game-tying home run.

"I started to run right after I hit the ball," Mazzilli said later, not anticipating he'd hit a homer any more than anyone else did, "but I had time to look and when the ball disappeared, I was as happy as can be."

Having tied the game up, Mazzilli also found himself in the middle of the NL's winning rally, such as it was. In the top of the ninth, with Kern still on the mound, Joe Morgan worked a one-out walk and moved to second on a balk. Kern intentionally walked slugger Dave Parker and retired Craig Reynolds on a pop-up, but issued a walk to Ron Cey to load the bases. Having seen enough, AL manager Bob Lemon turned his own ace, Ron Guidry, to get the third out. In this mini Subway Series, despite having the reigning Cy Young Award winner on the mound, the verdict went to Queens. Guidry walked Mazzilli to force in the go-ahead run. Bruce Sutter finished off the AL with little trouble in the bottom half, and the National League had yet another victory.

Mazzilli was responsible for the tying and winning runs, but MVP honors went to Pittsburgh's Dave Parker, whose powerful throwing arm squashed potential AL rallies by gunning down Jim Rice's attempt at a triple in the seventh and Brian Downing at the plate to end the eighth. Still, Mazzilli's homer and plate discipline were a bright spot in a season (and era) that held precious few of them for the Mets. Mazzilli went on to lead the team in RBIs that year with a whopping 79. Makes a person want to do the hustle just thinking about it.