Marlins 7, Mets 3: Home Is Where the Barf Is

Share All sharing options for: Marlins 7, Mets 3: Home Is Where the Barf Is 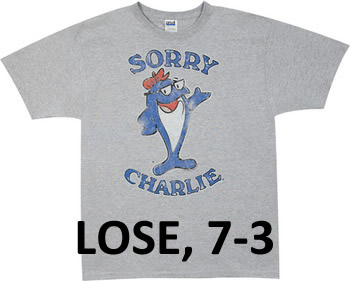 It's no news to Mets fans that the Marlins have been Mike Pelfrey's bete noire (poisson noire?). He has not beaten them since his major league debut back in 2006, when he squeezed out five innings in a blowout victory. Two weekends ago, he gave up four runs and two longballs over six innings in Miami, which still makes it one of his better performances against the team in recent years. In his previous start against Florida on May 16, he gave up just one run over seven innings, in a game the Mets eventually lost in as infuriating fashion as any I've ever seen. (Don't look it up, trust me.) Other than this, his history against the Fish is ugly, with a capital yuck.

Tonight's performance existed about in the middle of Pelfrey's traditional outings against the Marlins, and in line with his starts this year in general. In a word, frustrating. He did not benefit from great defense in the first inning, when Omar Infante (owner of a lifetime batting average vs. Pelfrey that is still being calculated by a supercomputer) smashed a booming one-out hit high off the left field fence. It could have gone for a double if played correctly. Unfortunately, Jason Bay ran back as if he could catch the ball, only to watch it bounce over his head. Angel Pagan took his sweet time backing up the play, which both allowed Infante to cruise to third with a triple and score shortly thereafter on a Gaby Sanchez sac fly to shallow right. (A better throw may have had a chance to get Infante at the plate, but The Duda does not abide the cutoff man.)

In the third, after getting the first two outs with ease, Pelfrey ceded three straight singles to Emilio Bonifacio, Infante, and Sanchez to plate another run, throwing 27 pitches in the process. The fourth began inauspiciously with a leadoff single by Logan Morrison, then continued in that vein when David Wright sidearmed a grounder from Stanton into the outfield, giving the runners a free pass to second and third. A sac fly from Petersen brought in a run to make the score 3-0 in favor of Florida.

Pelfrey worked around baserunners in the fifth and sixth to limit the damage there, which meant he left with a quality start under his belt. To anyone who watched the game, however, Pelfrey's start had the quality of a gift bought at the airport, satisfying no one.

Meanwhile, for the disturbing majority of this game, his teammates continued their punchless post-Beltran offense (or lack thereof). The Mets managed a hit apiece in each of the first three innings against Javier Vazquez, each of them coming with two outs, each a single. The hardest hit ball, ironically, was from Pelfrey, who drilled a ball to straight-away center field in the second inning. It very nearly flew over Petersen's head before the center fielder tracked it down. Horseshoes and hand grenades, as they say.

The Mets finally got on the board with a home run by (are you sitting down?) Jason Bay, who blasted a solo shot to the bullpen with one out in the fourth. Most homers at CitiField are hit pretty hard, but this one more than most, an opposite field shot some 415 feet to right-center. However, it was all the Mets could muster against Vazquez. Jose Reyes hit a one-out double in the fifth, but when he tried to score on a Justin Turner single, he was gunned down at the plate by a mile, thanks to a perfect throw from Stanton. (On Twitter, Kevin Burkhardt called it "an abosolute hose." I have never heard that term applied to a strong outfield throw. Just thought that should be preserved for posterity.)

After the sixth passed in listless 1-2-3 fashion, Vazquez received what Ron Darling called "the dreaded handshake," despite owning a reasonable pitch count. He talked himself into getting another inning and rewarded this faith by setting the Mets down in order yet again, recording his first two Ks of the evening along the way. A pitcher who can not strike out anyone in the first six innings should probably be touched up for far more than one run. The Mets' bats did not see it this way.

The Marlins were held at bay in the seventh by Ryota Igarashi and in the eighth and ninth by Manny Acosta, whose brand new billowing 'fro inspired the SNY booth to wonder which similarly coiffed 70s player he most resembled. (Oscar Gamble? Jose Cardenal?) Acosta's hitless two innings were particularly impressive, as he had to negotiate around a Jose Reyes throwing error in the top of the ninth.

It looked like his efforts would all be for nought as the Mets were lulled to sleep in their half of the eighth by Edward Mujica, The ninth began no better when David Wright led off against closer Eduardo Nunez by hitting a sizzling ground ball that Hanley Ramirez somehow snared. (I think this is the only remotely difficult play that Ramirez has ever made.) Angel Pagan lined a single over second base that Stanton fielded rather lazily. This inspired Pagan to try and take second on an arm that had thrown out Reyes easily back in the fifth. (You could actually hear the crowd gasp as he did it.) Somehow, Pagan beat it by the slimmest of margins and was not forced to pay for his crimes.

For some reason, Bay followed this sudden turn of good luck by swinging at the very first pitch, sending an easy grounder to third and bringing the Mets down to their last out. Lucas Duda made the most of it by slamming a 95 mph Nunez fastball to center field for a game-tying homer.

In the top of the tenth, the Mets turned to Jason Isringhausen, but he gave up one-out singles to Sanchez and Ramirez. He also gave up a single to Dewayne Wise, but looked to catch a break when he took an enormous turn toward second. Murphy fielded a cutoff throw from Duda, but hesitated in throwing to Turner covering first, and Wise was inexplicably allowed to scramble safely back to first. Had the Mets accepted this gift, they would have been able to walk the dangerous Mike Stanton. Instead, they were forced to pitch to him with the bases loaded and one out, and he made them pay by clubbing a grand slam to left field.

Of course, Izzy let Stanton work a full count and hung an absolute meatball to him, but Murphy is unquestionably the goat in this scenario. Throw to first right away, Wise is out, Stanton is walked. Would Izzy have been able to get the next batter? We would have found out, had the relay throw been fielded by a halfway competent fielder.

Stunned, the Mets went quietly against Burke Badenhop in the bottom of the 10th. Yes, the Mets are back to just one game over .500, are a completely abhorrent 5 games under .500 at CitiField, have totally forgotten how to field baseballs (if they ever knew), completely threw away a thrilling ninth inning comeback for the second game in a row, and look like a shell of the team that slapped around the Reds last week. But hey, look at this time lapse photo of the Milky Way streaking across the sky, Kinda makes baseball, and everything else, seem insignificant, doesn't it? And if you look closely, you can see the light from the Mets' last home series win finally reach the Earth. 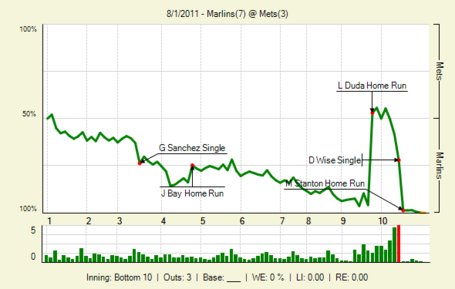 Nice job by freakystyley; their effort in the game thread embiggens us all.