Was Daniel Murphy Out of Position?

Share All sharing options for: Was Daniel Murphy Out of Position?

There's been quite a bit of discussion around these and other parts about Murphy's positioning on that fateful play Sunday afternoon. Well for those that were not watching the broadcast, SNY aired an interesting little graphic the following night (below). Basically it shows Murphy's play alongside Justin Turner making a similar play on Monday night. In both plays the second baseman fields a throw from the catcher attempting to catch a runner stealing. 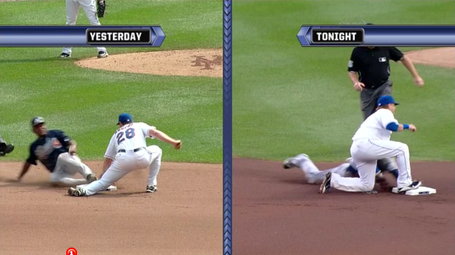 On each play the runner was safe. However, the outcome of the plays doesn't really matter. What matters is how each player lined himself up. On the Turner play he clearly hangs back behind the bag (below), waiting for the throw to reach him and really only exposing one, bent knee as he makes the tag. 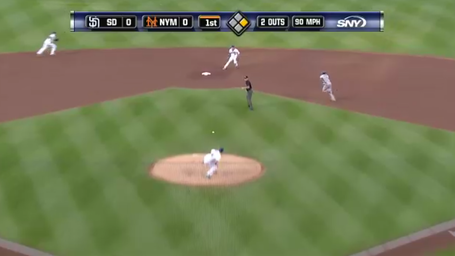 When you watch the Murphy play, Paulino's throw was to the shortstop side which doesn't help the matter but Murphy clearly runs directly to the bag as the play unfolds (below). He does NOT wait behind the bag for protection like Turner. In so doing Murphy leaves both legs exposed to the runner, including the vulnerable, unbent left knee. If Constanza had slid in with Turner in position he likely would have spiked him up pretty good, but there's far less chance of catastrophic knee injury there. 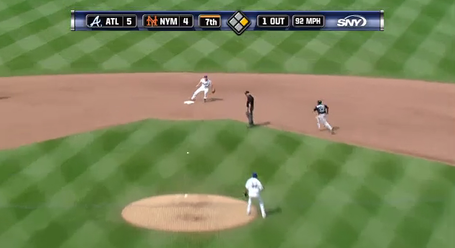 It seems to the untrained eye that Murphy did leave himself open to injury, at least more so than a more capable second baseman would on a similar play. Manager Terry Collins -- himself a middle infielder by trade -- echoed that sentiment following the incident.

Now does all of this mean that Murphy is incapable of ever becoming a solid second baseman? Does it even mean that he is not a solid second baseman now? No, not really. What it means is that he still clearly lacks on some of the more instinctive plays -- especially those around the bag -- and that we probably shouldn't downplay the difficulty of second base defense, considering the potentially drastic repercussions.