The Mets' lineup without Jose Reyes, Ike Davis and Carlos Beltran (cry) is a group that can get on base at a not-terrible rate but can't provide the death blow extra base hit needed to put crooked numbers on the board. Look away, it's hideous. Of tonight's starting nine, only David Wright and Lucas Duda have slugging percentages above .400, and even their ~.440's are nothing to boast about. So Ian Kennedy's seven inning, six hit, one run performance against our heroes wasn't exactly a shocker. That his weird, extra skin flab arm -- see above picture -- is able to throw low-to-mid 90s heat is a shocker.

This one looked like a blowout candidate early on. Dillon Gee labored through the first two innings and the Diamondbacks jumped out to a 4-0 lead. Justin Upton rocked a solo home run in the first inning, continuing his MVP-worthy season. Sean Burroughs (yeah), Cody Ransom (seriously?) and Kennedy (that's the pitcher) hit back-to-back-to-back doubles in the second inning to account for three runs and demoralize us all. Gee settled down, throwing three uneventful, scoreless innings thereafter. His FIP is now 4.53, which would have looked better before the offensive downturn that sadly started last season and continues today. The Great Home Run Depression.

The Mets quietly clawed back after the early deficit. A Jason Bay RBI single in the fifth inning, a Jason Pridie RBI groundout in the eighth inning and finally a sacrifice fly by Willie Harris in the ninth inning rounded out the top half of the scoreboard. Unfortunately, they couldn't break through with a big hit and went 1-for-10 with runners in scoring position. J.J. Putz closed the game on a David Wright groundout, earning a save despite allowing the sac fly. This game didn't feel as close as one run, if that makes sense.

Bay went 3-for-4 on the night, improving his OPS to .709. Going with my gut, and not looking at stats, it seems like he has been hitting better lately. But I'll just leave it at that, because every time someone says "hey I think Bay is finally figuring it out!" he goes 0-for his next like 25 at-bats.

Scott Hairston continued his run of awesomeness, cracking a pinch-hit double to lead off the ninth. I adopted Hairston early this season after the overwhelmingly negative response to his first month as a Met. He struggled, no doubt, but the vitriol he received was over-the-top. Mets fans have been subjected to some heinous bench players in recent years -- Gary Matthews Jr., Alex Cora, Argenis Reyes, you know the rest -- so whenever a reserve struggles everyone starts howling for his head, with no regard for past performance, future projection and the concept of regression. Hairston's true talent level is likely that of a league average hitter. He's capable, if unspectacular, in the outfield and costs next to nothing. At 31 years-old with the physique of a young buck bodybuilder, his spot on the roster is and always has been justified. I had a whole post prepared about this topic but Eno wrote up something similar, and likely better, so it was sh*tcanned. But bottom line, even the True SABR among us sometimes need to do a better job understanding sample size and regression.

Remember when the Mets swept the D-Backs in April? It seems so long ago. This time around Armando Galarraga and Barry Enright aren't the opponents, as they have both been swept into the figurative dustbin. The Mets' record is now 58-60. Without an injection of some Reyes back into this lineup, things don't figure to improve much. Saturday's game is at 8:10 PM and the pitching matchup is Mike Pelfrey vs. Daniel Hudson.

"Pelfrey's pitching? On the road? Serenity now", Terry Collins said to no one in particular. "Insanity later", replied Dave Hudgens.

Beer of the game: Ommegang Hennepin Saison from Brewery Ommegang in Cooperstown, NY.

A classic saison, if such a thing existed. The flavors consist of sweet fruit, barnyard/horse blanket, a touch of funky yeast character, and some mild bitterness. Though it sounds funky, this beer is accessible as they come and incredibly drinkable. -- Beer Advocate review 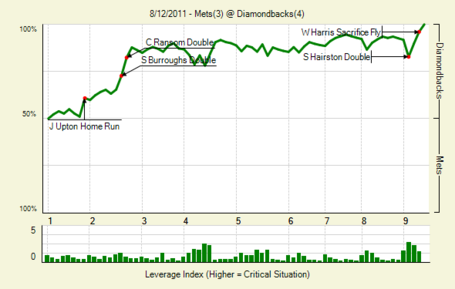