While Jason Isringhausen was probably the feel-good story of spring training, Lucas Duda just might be the feel-good story of the 2011 season. A prospects with the Mets' organization since he was drafted, Duda made significant stops at Brooklyn, Port St. Lucie, Binghamton, and Buffalo. He was a bit of a late bloomer in the minor leagues but was crushing the ball in Buffalo between his time there in 2010 and 2011.

Duda's first cup of coffee in late 2010 went poorly, and he posted an ugly .678 OPS in 92 plate appearances. With Carlos Beltran taking over right field to start the 2011 season, Duda again started the year in Buffalo and proved that he's mastered Triple-A pitching.

Early in the year, Duda struggled while getting inconsistent playing time at the big league level, but he's played a whole lot more since his demotion to Buffalo in May and promotion back to the Mets in June. Upon that recall, Duda still took some time to start hitting the ball. Let's have a look at his cumulative slash-line numbers by game this season. 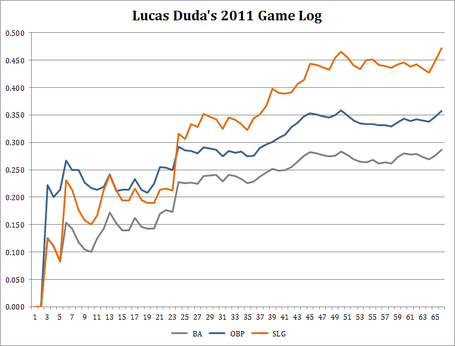 Watching the younger, unknown players on the team is probably the most interesting thing remaining in the Mets' season, and if Lucas Duda continues to hit the way he's been hitting lately, there's a chance that right field won't be a major area of concern heading into next season. And if it all works out, perhaps Gary Cohen will stop calling him "The Big Lebowski" and instead make some kind of reference to "The Dude."