*All results from games played on Monday, August 15th 2011

GAME ONE: DURHAM 2, BUFFALO 1 (Box) Lefty nibbler Mark Cohoon is good for at least a hit an inning, and the cute stuff isn't going to work without cover. Lutz was stranded after a first-inning single and Fernando, in the second, was made the front-end of a ground ball double play. After Cohoon was touched for a run in the third, Lutz knocked Satin around to tie it -- but couldn't do the same when, two innings later, Cohoon was nicked again. The game ended with big Bubba Bell standing on the middle bag, the third Bison left out on that base.

GAME TWO: DURHAM 8, BUFFALO 3 (Box) Josh Satin singled, Feliciano doubled, and Fernando Perez conked out a 3-run homer for the early 3-1 lead. A bit later it was 3-2, and after that 3-3, and the Herd kept throwing out baserunners and watching them die. In the 7th, if they could just race Luis Hernandez around from first they could walk off with the double-bill-shortened victory. The bunt was laid, two strike outs were made, the fans, dismayed. Michael O'Connor pitched the eighth, and I'll say this: the solo home run he gave up looked pretty good next to the grand slam.

SAVANNNAH 3, ASHEVILLE 2 (Box): Starting pitcher Taylor Whitenton tiptoed around two first-inning walks before sitting down fifteen of his next seventeen batters in a two hit, six strikeout gem. Meanwhile, a plunked Wilfredo Tovar was balked to second and scored on Albert Cordero's infield legger. In the third it was Tovar again, doubling home Alonzo Harris on a smash to left field for the 2-0 lead, which held until the ball was passed, in the 7th inning, to reliever Michael Hebert. At 6'3" 180, Hebert has the physical stature of Abraham Lincoln, and like Abe he took his lumps. The lead had vanished when, with two outs, Darrel Ceciliani poked a single, pillaged second, and charged home as a grounder split the infield. That was the 1-run lead, and this time the Gnat bullpen corked it. 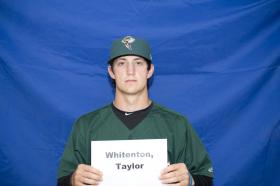 Savannah right-hander Taylor Whitenton was drafted as a shortstop by the Atlanta Braves in 2007, and became the first ever Georgia-born player to turn down the Braves organization. Here Taylor is making a precautionary video in case he's ever lost or stolen. In 22 games this season, Taylor's pitched 96 innings with a 2.81 ERA, 103 Ks, 43 walks, 6 HRs, and only 64 hits. He's a 6'3 190-pounder who throws an 89-91 MPH fastball, 81-83 MPH changeup, and a sweeping mid-70s curve. Here's video (not the one pictured.)

Stinking Goat of the Night
Mike O'Connor grabbed the ball in extras and served up idunnowhat for some well-measured shots -- including a grand slam home run.