Share All sharing options for: Mets 7, Padres 3: Playing the Game the Wright Way 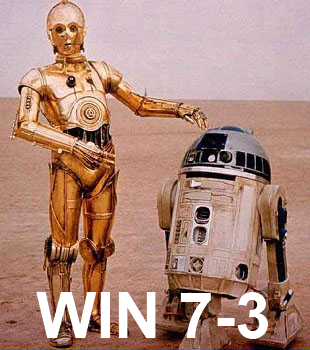 Although the pitching matchup of Mat Latos and Dillon Gee certainly figured to favor the Padres on paper, the Mets' lineup was able to do enough damage to win the game, taking two of three games in the series in San Diego.

Gee did what a big leaguer starting pitcher should do against the soft-hitting Padres, keeping them entirely in check for most of his 6.2 innings of work. The ugly part of Gee's start was that he walked four batters, one of which was Latos leading off the third inning, but he didn't walk more than one hitter in any individual outing and was able to limit the damage.

On the upside, Gee struck out five while only allowing five hits, and he erased that walk to the opposing pitcher with a very nifty behind-the-back grab of a ground ball that he turned into an inning-ending double play in the third. Speaking of awesome defense, David Wright ended the bottom of the fourth inning by making a diving grab on a grounder down the line and then faking out Cameron Maybin, who rounded third and was tagged out by Wright. It was some very nice trickery.

The Mets' bats were pretty quiet through the first two innings, but they got the scoring started in the third inning. Angel Pagan singled and stole second base to start the inning, and when Willie Harris grounded back to the mound, Pagan dangled off second base just far enough to draw the throw from Latos but just close enough to the bag to get back safely. The Mets had two runners on for David Wright, who hit a three-run bomb to left field to give the Mets an early 3-0 lead.

Mat Latos kept the Mets off the board through the remainder if his six innings of work, but they were able to add some runs against the Padres' bullpen. In the seventh inning, Ruben Tejada led off with a single, Gee was hit by a pitch, and Tejada stole third when the Padres' catcher tried to throw behind him at second base after a pitch. Perhaps the Padres should pay less attention to runners at second base. Tejada scored on a ground out by Pagan to first base, but that was the only run the Mets would bring home in the inning.

The Padres' best chance to tie the game came in the bottom of the seventh after Gee put runners on first and second with two outs. Tim Byrdak walked the only batter he faced to load the bases, but Manny Acosta came out of the bullpen and struck out one-season-wonder Jason Bartlett to end the threat.

The Mets added three runs in the eighth inning to really put the game out of reach, loading the bases with runners who all walked and plating a pair on an Angel Pagan single. Willie Harris single, too, to put the Mets up 7-1. It's worth noting that Kyle Blanks robbed Lucas Duda of a solo home run to begin the top of the ninth inning, using his height to reach just above the fence in left field and deny The Dude an opposite field homer.

Bobby Parnell threw a 1-2-3 bottom of the eighth with a strikeout and two ground outs, but with the large lead, Terry Collins turned to Ryota Igarashi to pitch the ninth. He issued a one-out walk to Aaron Cunningham and served up a double to Nick Hundley that scored the Padres' second run. Then Alberto Gonzalez singled to cut the Mets' lead to four runs, but Igarashi struck out Bartlett to end the game. 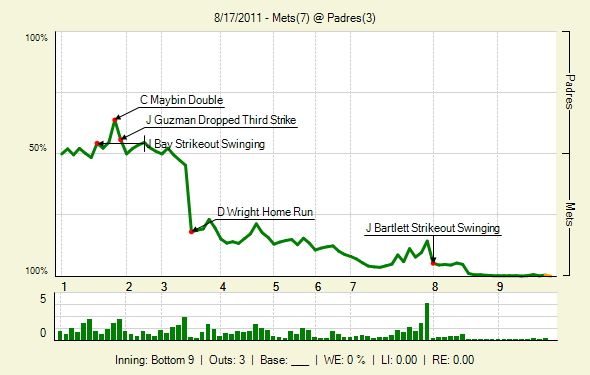