Share All sharing options for: Transcript of Paul DePodesta's Interview on SNY 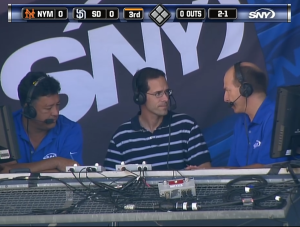 During the top of the third inning of the Mets' game in San Diego last night, Paul DePodesta joined Gary Cohen and Ron Darling in the SNY booth to discuss the draft and the minor league part of the team's organization. Here's a transcript of the interview.

Gary Cohen: Paul, of course, is the Mets’ Vice President of Player Development and Amateur Scouting. This was obviously a big week for you guys, the deadline for signing your draft picks, and you got it done with Brandon Nimmo, your number one pick, and the way I hear it, most of your draft picks you got signed.

Paul DePodesta: We did. We ended up signing nineteen of our first twenty. I think we signed everybody in the top eleven rounds. We even were even able to sign a handful of players after that who we’re excited about, guys who we think have some upside. We were able to convince them to start their pro careers rather than go to college.

D-3PO: I think when we got here, even last winter, we started talking about really trying to just stockpile talent. We wanted to look for players that had a chance to make an impact, whether they were high school, junior college, or college, and we talked about being aggressive and signing those players. We were in the draft, being in a position where we just took what we thought was the best player on the board, and then doing everything we could to sign him. So it was nice to actually be able to go through with that and identify some of those players and then sign as many as we could, and I think we were really happy with the way it ended up.

Gary: How difficult is it for you guys as an organization, to have a team right now that’s kind of muddling along and you’d like to get better quickly, to take the long view and take a kid from Wyoming, a high school kid who probably won’t be in the big leagues for four or five years at least, and go that direction? How difficult is it as an organization to have the discipline to do that and take the long view?

D-3PO: I think it’s incredibly difficult because we want to win today, at the major league level. At the same time, what we want to be able to do is win every year, and I think the only way you do that is build from within and create a foundation for the organization. And I think that’s what made the team great twenty-five years ago, and a lot of those players came from inside so that’s what we want to build again. And it’s going to take a little time, but we’re still going to try to win like crazy at the major league level now, and I don’t think we’ll accept anything less. But in the meantime, we want to make sure that we’re stockpiling that system, rebuilding the foundation, and get to a point where that foundation of minor league players starts pushing their way on to the major league roster and hopefully takes us over the top.

Ron Darling: Well obviously developing young pitching is so important for any organization; we hear a lot about Matt Harvey, of course we hear about Wheeler, you got in the trade for Beltran. What are some of the names, for Mets fans out there, that have had a good summer and moved up?

D-3PO: Sure, there a handful. There’s a young man named Jeurys Familia, from the Dominican Republic, who’s had an incredible year. I think he was the organizational pitcher of the year in 2009 and then last year, as just a twenty-year-old was in the Florida State League, and didn’t have as good a year as he had the previous year. Well this year, he dominated the FSL early, went to AA and has pitched very well there. So he’s actually the same age as Harvey, also throws 96, 98, has a plus slider. He’s a really interesting guy, he’s had a terrific year. We have a handful of other guys I think have had very nice years, too. I was talking to our farm director this morning, and we were just remarking about how many game reports now on our short-season clubs have our starting pitchers throwing 90 to 94...

Gary: We hear a lot about the term high upside, I mean this is what you guys have really stressed in the draft this year. Tell me about what that means. If you’re a fan, and you’re hearing Paul DePodesta wants a guy with a great upside, how do you identify those players? How difficult is scouting? How much are you relying on statistical analysis, and how much is just eyeballs?

D-3PO: That’s a great question. I think there are a lot of different components to it. We often talk about the difference between a major league player and a championship player, and often times it has little to do with physical ability. A lot of times that’s the makeup, that’s the drive, that’s the competitiveness that the player has. We’ve charged our scouts with trying to get to know these players as well as we possibly can. I think they’ve done a great job on that front. Anybody who’s interacted so far with Brandon Nimmo and or even some of our other picks has gotten a sense that this guy has the chance to be a championship person as well as a championship player. So that’s certainly one of the things we’re looking for.

D-3PO: I felt good, even going into this year, about some of our pitching, I think we’ve really added to that through the draft and even through the trades, and getting Zack Wheeler especially. We took five college starters in the top ten rounds that we really like. We also signed seven high school starters, which is probably just about as many as anybody did in the industry. We’re really happy about adding all those arms. We really feel like we’ve got some depth starting-pitching wise, and hopefully we’ll have some good problems to have next spring in terms of finding innings for some of these guys. On top of that, I think we have some real outfield depth, both in the corners and in center field. That’s probably our strongest area throughout the player development system, not only from short season but all the way up through Triple-A. Middle infielders, we need to continue to build that stock. Catching, we need to continue to build that stock. We signed four catchers this year, age seventeen and younger, three of them from Latin America and one in the US. So the guys will take a little while, and we also have two young guys that are both nineteen years old at Kingsport that are two good looking catchers. And we have some other good ones throughout, but I think we need to continue to work on the depth at that position.

Ron: You’ve been working in baseball for such a long time at such a young age. What do you think is the biggest change since you started in the business?

D-3PO: Certainly the signing bonuses have changed a lot. We were talking about, the other day, Ken Griffey went one overall, he got $100,000, and that was getting thrown around like it was pennies. I think teams have really started valuing their prospects a lot differently than they did once upon a time as more and more teams try to build from within. And then just, on a broader scale on the major league side, the game itself has changed. Ten years ago, fifteen years ago, when I first started and I was working with the Indians and then the A’s, and we had teams that just mashed, one-through-nine in the lineup, and you had five, six guys hitting twenty homers in almost everybody’s lineup.

D-3PO: I was going to say, right on cue, make me look bad. It makes the guy that hits the ball out of the ballpark that much more valuable because I think it’s a lot harder to find than it was ten, fifteen years ago.

Gary: Obviously, injuries at the major league level have been a huge concern for this franchise not this year but the past few years, but you’ve also had injuries at the minor league level, especially at the top level, whether it’s Kirk Nieuwenhuis or Fernando Martinez or Jenrry Mejia this year. How much will those injuries this year impact the Mets next year in terms of who you’re going to be able to promote, what’s coming up from the top level of the farm system?

D-3PO: Hopefully it won’t impact us a lot. The good news is all the guys who have gone down at the upper levels this year, when they have been able to play, whether it’s Fernando Martinez, Zach Lutz, or Kirk Nieuwenhuis, they’ve played extremely well. So we feel like they’ve really benefitted from the development time they’ve had there. Obviously we would have loved to have them have a full season, to get four- or five-hundred plate appearances, but we feel they’ve adjusted well, and it hasn’t been a lost season. With Mejia it’s just a matter of how early can you get him back? Hopefully more early next year rather han middle next year. I think all those guys really progressed. We’ll see if any of those guys are in a position to make up some of that time in winter ball, and then not really miss a beat coming into next spring.

Gary: Let me ask you about one more guy because it’s a guy who I get asked about all the time - Reese Havens - a guy who’s had trouble staying on the field. Where’s he at right now?

D-3PO: He’s in Double-A, he’s playing well. He’s another one; I think when he’s played, he’s played extraordinarily well, not only this year but last year. He is back on the field now, he’s been playing for a while, hopefully he’ll finish strong, and I think he’ll probably have some winter activity, too. I think it will be a productive year for Reese.