Unfortunately for Jon Niese, the statistics that are still most often used after a pitcher's name is said aloud on a baseball broadcast are wins, losses, and earned run average. "11-10 with a 4.05 ERA" doesn't exactly have a ring to it, but even those without a penchant for defense-independent pitching stats have most likely realized that Niese is easily the Mets' best starting pitcher.

Given the state of the Mets' rotation - a very good stater in R.A. Dickey, a good starter in Chris Capuano, and two decent starters in Dillon Gee and Mike Pelfrey - it may not sound all the impressive to be the best starter on the team. Judging by xFIP, however, Niese is more than just the Mets' best starter. Let's have a look at the MLB leaders through August 16. 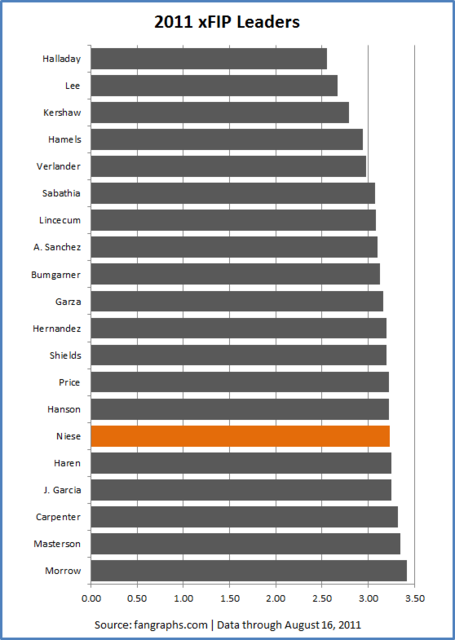 Sure, it's only 153.1 innings of work, but Niese is ranked fifteenth among all qualified starters in baseball in a stat which is pretty good at estimating future ERA performance. He's still relatively young, and thanks to a major reduction in walks this year - 3.21 walks per nine in 2010, 2.52 in 2011 - he's improved since last year.

If Johan Santana is healthy and anything like his old self to begin the 2012 season, a major uncertainty at this point to say the least, the Mets could sport two excellent pitchers atop their rotation. How much that matters remains to be seen, largely because Jose Reyes' return is also no guarantee, but it's definitely possible that Niese pitches as well as or better than Santana in 2012.