Checking in on Jason Bay: Signs of Improvement?

Share All sharing options for: Checking in on Jason Bay: Signs of Improvement?

A while back I wrote a piece that argued Jason Bay's problems at the plate might be more permanent than some thought. The free-agent outfielder has certainly under performed his contract as well as reasonable expectations since he signed with the Mets.

The question, however, was whether his underwhelming performance in 2010 and the beginning of 2011 could be attributed to missing time with various injuries or more about permanent decline.

In that piece I looked at Bay's performance on various types of pitches in different parts of the zone in 2010 versus 2009. My conclusion was that Bay's performance on fastballs, particularly middle of the plate and high as well as up and middle in, declined dramatically and that it might signal that his shoulder was not healthy.

I decided to follow up on this conclusion, as one should, to see how this has played out in 2011. Bay has just about played the exact number of games and had the same number of plate appearances this year as he totaled last year.

Here's Bay's overall performance in terms of production per swing for 2011 compared to 2010. 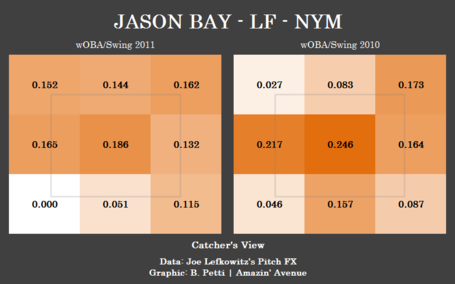 We see some definite improvement on pitches up in the zone (middle of the plate and inside). He hasn't quite recaptured the same level of productivity on these same pitches as he had in 2009, but definitely some improvement from last year. 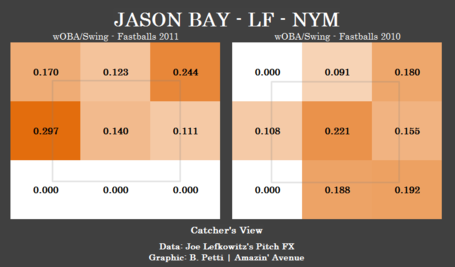 What is also encouraging is that Bay is not only swinging at more fastballs in these critical zones, but he's also whiffing less when he does. 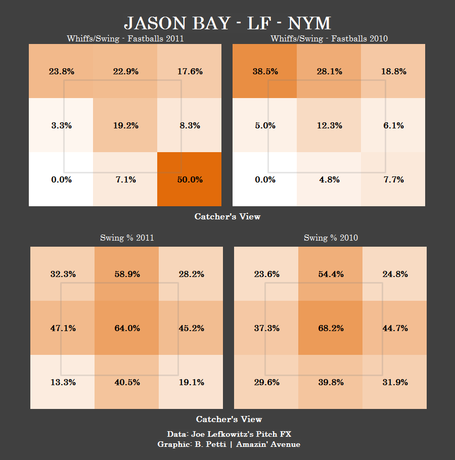 Where Bay has increased his whiffs is on breaking balls, and while that's not ideal I'd rather have him missing breaking balls than unable to drive fastballs.
This isn't to say all his problems are solved. Bay's current performance on balls high in the middle of plate is still less than 2009 (.205). Additionally, on balls up and in Bay is still behind his 2009 performance (.215). He's still missing on way more fastballs inside, up and in, and middle up than one would like, but we definitely see improvement since last year.
All of this is to say I am cautiously optimistic. I still think there has been some permanent decline, likely physical in nature and there is only so much he can improve. But his slugging percentage has increased as the year has progressed, as well as his line drive rate.
So while we are unlikely to see anything close to the Jason Bay of 2009, the data suggests we may at least get him back to a serviceable level. And at this point, I'd take it.