I'm sure you've all seen those t-shirts with the modified Phillies logo. I'm talking about the ones that take a piece of the name "Phillies" as it looks on their unis and places it, decontextualized, in the t-shirt medium. The one I've seen most often just says "ILL" on it. When I first spotted it, I wondered if it was pro- or anti-Philly. According to Twitter friends from The City of Hoagies, the answer was pro-Philly, as "ILL" was meant to be taken as they kids say it. (I'm hip.) But I've also seen a similar tee that says "LIES", which I don't quite understand as a pro-Philly statement. I'm going to assume someone just realized they could make another word out "Phillies."

This is all preamble to say that, until recently, I've never really seen a similar t-shirt for the Mets. This is mostly because there aren't enough letters in "Mets" to allow it. I've seen plenty items that use the "Mets" script as a jumping point, such as the "Madoff" tees and the "Meats" tees for carnivores. Not to mention the various t-shirts worn by some partisans of the Yankees and the aforementioned NL East team that say clever things like MUTTS and DAVID WRIGHT SHOULD HAVE SEX WITH HIMSELF. None, however, employ the William Burroughs-esque cut-ups of the Phillies' "ILL" tee and its brethren.

Then, earlier this week, I was walking around in the Village on my lunch break, and took a detour down tiny Minetta Lane. Catty-corner from Cafe Wha, I spotted an ancient mailbox with this sticker on it. 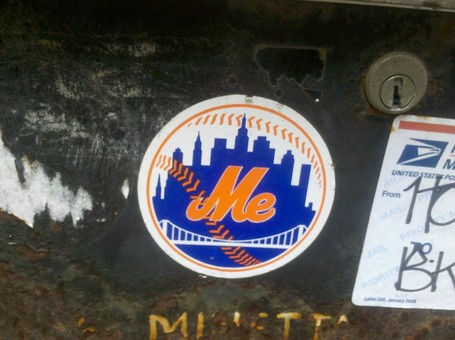 Brilliant in its simplicity, no?

The sticker looked fairly new. The white in the logo wasn't chipped or smudged enough to suggest it had been there for a long time. But as you might imagine, googling "Mets me logo" (or variations thereon) revealed nothing. So my question is, Have you seen this in your neck of the woods? If so, do you have any idea where it comes from? Because I am a nerd and I hate not knowing stuff.