Share All sharing options for: Mets vs. Brewers Saber-stat Preview 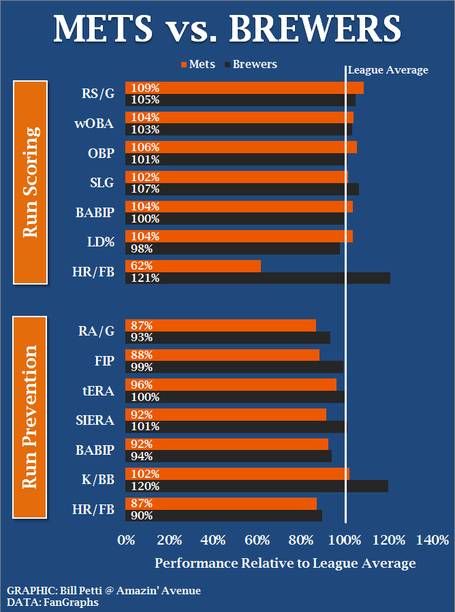 The Mets and Brewers are a pretty equally matched team on offense, not so much on defense. However, the Brewers have a terrible Home-Road split this year. Offensively, their hitters have wRC+ of only 85. Only teams like those hard hitting Twins, Mariners, Giants, and Astros are worse on the road. Their pitching has fared much better, putting up an xFIP of 3.75 (6th overall) and a FIP of 3.98 (13th overall).

Still, the lack of offense on the road combined with hitting in a pitcher-friendly park gives me a bit of hope. I'd have more hope if Gee or Niese was pitching one game instead of Pelfrey, but it is what it is.

I say Mets lose game one, but take the remaining two games.

For more great Brewers coverage, be sure to check out Brew Crew Ball.