Brewers 6, Mets 1: Will There Ever Be a Rainbow?

Share All sharing options for: Brewers 6, Mets 1: Will There Ever Be a Rainbow? 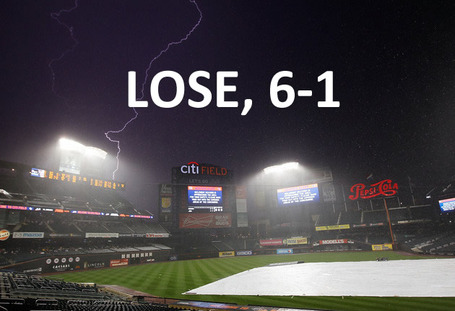 An apocalyptic thunderstorm was fast descending on Queens just as play was scheduled to begin, so the tarp was applied and fans scampered for CitiField's few indoor areas. If anyone had any designs of calling it a night, too bad! At least if they relied on the 7 train to get home, since that subway line was rendered useless by the torrential downpour. Another bang-up job by the MTA, a public utility that operates with such perfection they need not open their books to us, especially not when proposing fare hikes. However, I digress.

The game finally got going a mere 2 hours and 46 minutes after the scheduled start. In the first, Mike Pelfrey was victimized by a two-out David Wright error that allowed Ryan Braun to reach safely. Braun soon stole second, which gave the Mets the option of pitching carefully to Prince Fielder. They opted not to do so, unwisely, and Fielder lined it into center for an RBI single.

The Brewers were rather chippy early about home plate ump Angel Campos' strike zone. Corey Hart ended the top of the second by striking out looking, after the thought he walked twice. After a Nyjer Morgan single-and-steal opened the third, Ryan Braun was similarly victimized. He let Campos know of his disapproval and was ejected for his trouble. (While some of the calls were questionable, none seemed worth taking an early exit for, unless Braun just wanted to catch up on some sleep.) After an intentional walk of Fielder, the inning ended on an excellent 5-5-3 double play converted by Wright.

The Mets managed some lengthy at bats against Marcum, but not a whole lot of offense. Angel Pagan hit a leadoff single in the bottom of the first, but was erased on a caught stealing. After a silent second, Ruben Tejada hit a one-out single up the middle, but Pelfrey foul-bunted himself out of the batter's box, and Pagan bounced out to Fielder (who looked like he lost the ball in the voluminous folds of his jersey) to end the inning. Wright worked a one-out walk in the fourth, but remained firmly anchored to first.

In the top of the fourth, Hart dunked a bloop hit down the right field line that he legged out for a double. A Morgan sac bunt moved him to third to bring up Mark Kotsay, in for the ejected Braun. I was going to write that Pelfrey inexplicably walked him on four pitches, except that virtually no example of baseball idiocy is inexplicable when it comes to Pelfrey. The free pass to Kotsay allowed the Brewers to open the floodgates. Fielder poked the first pitch he saw between third and short for his second RBI single of the day. Casey McGehee watched a pitch before looping a single into shallow center to plate another run, and Yuniesky Betancourt swung at the first pitch he saw and lined it past third for an RBI double. Four pitches, three runs, and a 4-0 lead for Milwaukee.

From that point, it was all over but the shouting. (You could hear every remaining fan shouting, in fact, in the cavernous, mostly empty stadium.) The Brewers got two more runs on a two-out McGehee RBI single in the sixth and a run-scoring wild pitch. The Mets, meanwhile, finally scratched out a run in the seventh on a Jason Pridie double and a Josh Thole RBI single, but all it did was remove the goose egg from the runs column.

The only other sign of life came in the top of the eighth, when Fielder seemed to take offense at a pitch from Tim Byrdak he deemed too far inside. Or Byrdak misinterpreted Fielder yelling at himself as the slugger criticizing him. In any case, Fielder got in Byrdak's face on his way off the field, and as the benches and bullpen emptied, this game threatened to get interesting. Ultimately, the situation was defused with no bloodshed.

The loss, combined with a come-from-behind win by the Nats, gives the Mets sole possession of fourth place. Not much else to say, except I hope if you're reading this, it's because you did something much more fulfilling with your Friday night, like clipping coupons or watching paint dry. And if you did watch this all the way through, at least you got to listen to Gary and Keith. Those who tune in tomorrow afternoon might be more rested, but they will have to endure whatever wretched announcing crew Fox forged in the fires of Mordor. Who's to be more pitied? The answer, of course, is all of us. 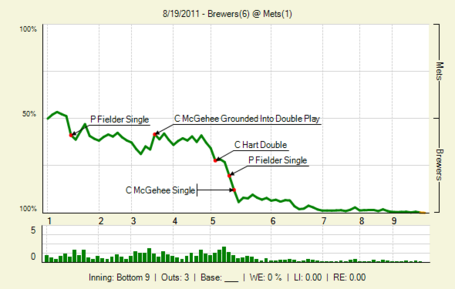 The roll call was being wonky at post time. Perhaps it, like me, needs sleep. I shall post it at the soonest possible convenience so we can all know who embiggened us all.