Brewers 6, Mets 2: Stop Me If You Heard This One Before

Share All sharing options for: Brewers 6, Mets 2: Stop Me If You Heard This One Before

R.A. Dickey looked sharp early, setting down the first six Brewers in order. In a tough at bat to start the top of the second, Prince Fielder fouled off one slow knuckler after another, then finally struck out swinging on a fastball. He stalked away from the plate smiling and laughing, unsure exactly how it all happened. Dickey'll do that.

In the top of the third, Dickey plunked Jerry Hairston to lead thing off. After a one-out sac bunt from pitcher Yovani Gallardo, Corey Hart hit a grounder just beyond David Wright's reach. Luckily, Ruben Tejada caught up to the ball and kept it on the infield to save a run. Dickey induced a tapper back to the mound to escape danger.

Unfortunately, Gallardo--who is pretty good at pitching--was just as sharp. When the Mets faced him in Milwaukee back in June, Gallardo had one of his worst outings of the season. Today, not so much. Angel Pagan provided the sum of the Mets' offense for the first four innings, banging a leadoff double off the outfield wall in the first and lacing a two-out single in the third. He was stranded both times. Other than Pagan's hits and a sharp lineout off of Wright's bat, there was nary a hard-hit ball among the bunch.

The Brewers finally got to Dickey in the fourth when Casey McGehee hit two-out solo blast to left field. He found trouble again in the fifth when Hairston led off with a single and Jonathan Lucroy hit a double that just eluded Pagan's glove. Somehow, he wriggled out of the jam by getting Gallardo (an excellent hitter for a pitcher) to tap a ball just in front of home plate and Corey Hart to foul out behind first. Dickey then fell behind Nyjer Morgan but fought back to catch him looking. Morgan flung his bat furiously (and hilaroiusly) in frustration.

After some more futile hitting from the Mets in the bottom half (a leadoff single from Josh Thole that went for nought), Milwaukee made up for their lost opportunity. Ryan Braun led off with a single, stole second when Dickey paid him no mind, and scored on a Fielder single that confounded the shift, putting the Brewers up 2-0.

For the second game in a row, the Mets followed six innings of sleepwalking with a sudden rally. Wright led off the bottom of the seventh with a bloop single to right field. Lucas Duda took Gallardo's very next pitch and blasted it into the bullpen for a game-tying two-run homer. Jason Bay followed with a double off the wall in left, and it looked like the Mets might find a way to break things open as they had on Saturday. Little did they know this would be their last hit of the day. Thole's attempt to bunt Bay to third failed. One out later, the Brewers elected to walk Tejada, basically to force Terry Collins to pinch hit for Dickey. A defensible decision on both sides, one that paid off for Milwaukee; pinch hitter Willie Harris flew out to right to end the inning.

Manny Acosta took Dickey's place in the top of the eighth and was not as effective, to say the least. Morgan had looked awful at the plate all day and had walked a grand total of 9 times coming into the day, but Acosta somehow found a way to issue him a free pass (after Dickey had walked no batters, and thrown only 16 pitches out of the strike zone). He tried to make up for it by getting ahead of Braun 0-2, but gave up a soft single through the right side side that moved Morgan to third. Tim Byrdak came in to face Fielder and induced a grounder that could have--and should have--gone for an easy double play, but Justin Turner flung a terrible throw wide of Tejada at second, which not only allowed Morgan to score, but kept Braun and Fielder on the bases with no outs.

Jason Isringhausen appeared one day after his thermonuclear meltdown and allowed Braun to swipe third. He struck out McGehee on a pitch as high as his head and induced an infield pop up from Yuniesky Betancourt, but then gave up a sharp single past third to Hairston, scoring Braun and putting Milwaukee up 4-2.

Following the Brewers' error-aided outburst, the brief fight the Mets showed in the seventh became a distant memory. Frankie Rodriguez relieved Gallardo in the bottom of the eighth, but the only damage they could manage against him this time was a liner Pagan hit off his side. Rodriguez was still able to field the ball and throw Pagan out, and retired the next two batters in order.

Izzy ceded a bloop single to pinch hitting birthday boy Craig Counsell (41 years young) in the top of the ninth and gave way to Pedro Beato, who gave up his own single to Hart, moving Counsell to third. Morgan then laid down a safety squeeze toward first that Duda fielded. He may have been able to come home but opted for the out at first, and Counsell crossed home with the fifth Milwaukee run. Braun followed with a booming hit over Jason Pridie's head into the Mo Zone, and Hart scored easily to put the Brewers up 6-2.

Beato stopped the bleeding there for all it mattered. LaTroy Hawkins set the Mets down in order in the bottom of the ninth, giving the Brewers their first sweep of a three-game series in New York since they moved to the National League in 1998.

What do we call this act? The Aristocrats! 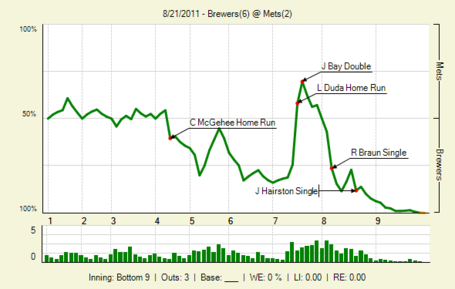