Share All sharing options for: Mets vs. Phillies Saber-stat Preview 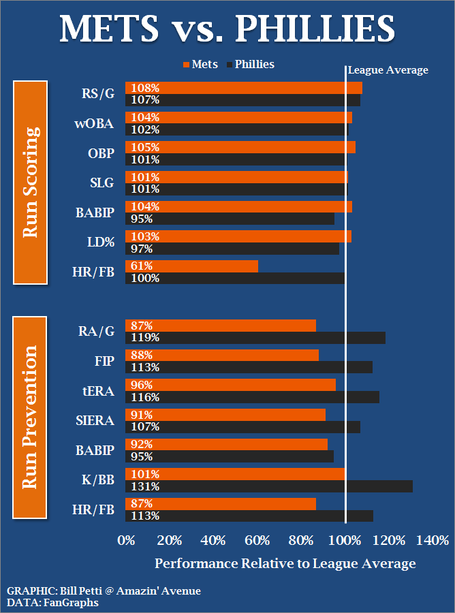 After getting swept at home by the Brewers, the Mets (60-66, 21.5 GB) begin a three-game series against another division-leading team--NL East-leading Philadelphia Phillies (81-44).

Earlier this year the Phillies were leaning heavily on their pitching and defense. With the return of Chase Utley and the positive regression of some regulars, the Phillies now sport an above-average offense to go along with their unrivaled run prevention. Pick a metric, any metric. Either way you slice it, they are arguably the best team in the majors heading into the final six weeks of the regular season.

At home, the Phils sport the second best xFIP in the league behind Atlanta. They've only managed to be league-average offensively at home, but with that pitching it's typically more than enough (they are 44-20 at home this season, on Milwaukee has been better).

With Kendrick scheduled to pitch game three I'd say the Mets have a chance at avoiding the sweep.

For more on the Phillies (and generally great baseball writing), be sure to check out The Good Phight