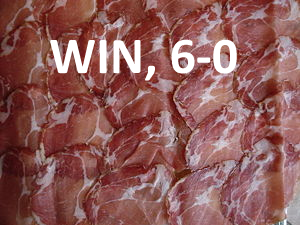 The Mets beat Atlanta's Tim Hudson twice in a 10-day span earlier this season, though that time feels like a million years ago these days. Hudson has been one of the better pitchers in the NL since that rough patch, but he looked similarly vulnerable early in this game. And yet, the Mets had a terrible time trying to take advantage of their good fortune.

In the bottom of the first, Ruben Tejada snuck a one-out double past a creaky Chipper Jones and David Wright walked. But Lucas Duda swung at Hudson's first pitch and popped out. After a walk to Nick Evans loaded the bases, Josh Thole bounced one right up the middle that went for a fielder's choice. Then in the second, Jason Pridie laced a one-out single to center and moved up on a sac bunt from Chris Capuano, but he was stranded there when Angel Pagan flew out.

A Tejada leadoff single to lead off the third was negated when Wright turned Hudson's first offering into a double play, and a Duda two-out hit went for nought when Evans hit a comebacker. In the fourth, Pridie hit a two-out single, and Capuano actually worked a full count, but could manage no more than a well-struck fly out to right-center.

Meanwhile, Capuano was sharp in the early going, setting down the first 12 batters he faced while striking out six of them, and doing so in decidedly efficient fashion. The Braves looked particularly susceptible to his slider, flailing at many of the lefty's pitches in the dirt. His defense kept his sheet clean with one out in the top of the fourth, when Justin Turner caught up to a Martin Prado grounder, and Evans managed to field his errant throw and tag the runner out all in one motion.

This was around the time where a person might start to think, Could this be it? Capuano appeared to have that kind of stuff--and luck--tonight. But for those who dared dream such dreams, the Not Tonight Boss was delivered by Dan Uggla, as he shattered his bat and sent a grounder past a diving Wright to start the top of the fifth. He was erased on a groundball double play off the intact bat of Freddie Freeman. Capuano finished off the inning with a flourish by striking out David Ross on three pitches.

It appeared the Mets' woes would continue in the bottom half, as Pagan led off with an infield single up the middle. Alex Gonzalez snared his hit and heaved a terrible throw wide of first, which inspired to Pagan to try for second. Catcher Ross was backing up the play and threw out Pagan by a mile and a half.

But lo and behold, Tejada rapped his third hit of the evening and the seventh for the Mets overall. Wright was caught looking, but Duda was hit by a pitch to push Tejada up to second, which allowed him to finally score the first Mets run when Evans laced a single to left field. Then Thole blooped a single into shallow center, and Duda was somehow able to chug home to make the score 2-0.

Capuano was finally staked to a lead, though right at the part of the game where tends to waver. But he did not appear to be fading at all as he set down the Braves efficiently in the sixth and seventh, retiring them in order in both innings and adding another three strikeouts to his ledger. Not only did he end the seventh by striking out Chipper (and right after Chipper probably should have been called out on a two-strike check swing), but Capuano spent only 70 pitches to get that far.

After being held in check in the sixth, the Mets drove Hudson from the game in the seventh with a one-out Duda single and an Evans walk. Lefty reliever George Sherrill retired Thole, but Fredi Gonzalez also tried to play matchups against Turner by bringing in Scott Linebrink. Turner laced his first pitch just barely fair down the left field line to plate two more runs and put the Mets up 4-0.

The Mets struck again in the eighth against a rather tough customer, the lefty Jonny Venters, who's given up virtually nothing to anyone all year. But the Mets did manage to score against him somehow during their last trip in Atlanta, and did so again here. Pagan led off by sneaking another double past third base. After an out, Wright was issued an intentional walk, but Duda blasted one off the bullpen wall that allowed both him and Pagan to score, giving the Mets a healthy 6-0 lead. Duda's double is only the second extra base hit Venters has given up to a lefty batter all year.

Capuano clearly had a complete game on his mind and did his best to get one. I remember a scene in the immortal (to me) 1986 highlight video, in which Harry Caray described Doc Gooden in the ninth inning "coming to the wire like a thoroughbred." That's what the southpaw looked like in closing out this game.

In the top of the eighth, he retired the first two batters (along with another strike out), making it 10 Atlanta hitters sent down in a row since Uggla's single. Ross broke up the streak with a long double into the Mo's Zone, but Capuano induced a harmless foul out from Alex Gonzalez to escape what passed for danger in this contest. Then in the ninth, Capuano set them down in order yet again, fanning two more in the process. His 13th and final K of the evening put the golden sombrero on Michael Bourn to end the ballgame.

This was the first time all year the Mets won the opener of a home series. Although technically this was also a finale too, since Hurricane Irene limited this series to one single game. No matter, as Capuano pitched good enough for three starts.

Savor this one. It's the closest thing you'll see to Mets baseball until Monday, at the earliest. Stay dry, everyone. 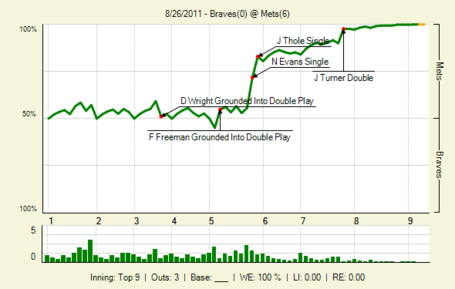 Nice job by CTRefJay; their effort in the game thread embiggens us all.