Ah Bernard Gilkey. Someone had to hold the torch during those transitive mid-90's seasons and Gilkey did just that. Though I must say I never really know whether to boo or cheer the memory of Gilkey. Instead in my own head it's like that line from Seinfeld where I just thank him for a job...done.

But you know what? Upon further review, Gilkey deserves more credit than that. His legacy should not just be as that jackass in Men in Black. I mean I knew that he'd been respectable in his brief three-year span in orange and blue but not until re-examining his '96 campaign did I realize how f*cking good it actually was. Not just good but depending who you believe -- B-Ref lists Gilkey's '96 as an 8.1 WAR season, Fangraphs 7.6 -- it was perhaps the greatest single season by a non-pitcher Met ever. Ever. 30 homers, .317 average, 18 stolen bases, .955 OPS...and he came in 14th in MVP voting. Cool.

The same cannot be said for this card though, or any card by the crummy Leaf brand. I mean seriously, how could a self-respecting baseball card company mass produce a card that has just one previous season of stats on the back?Disgraceful. Regardless, here we have a 1996 Leaf Studio 96 Bernard Gilkey card. 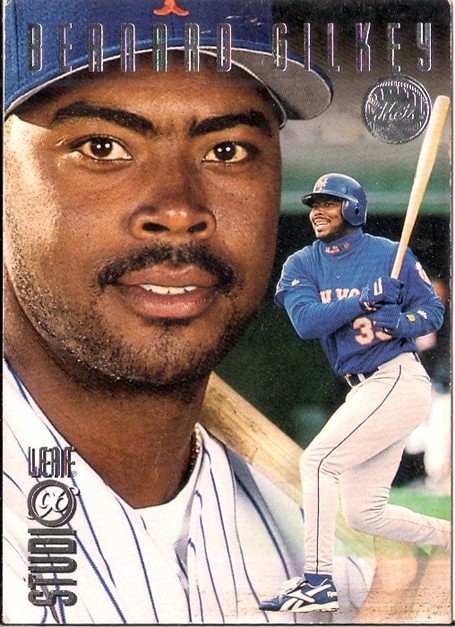 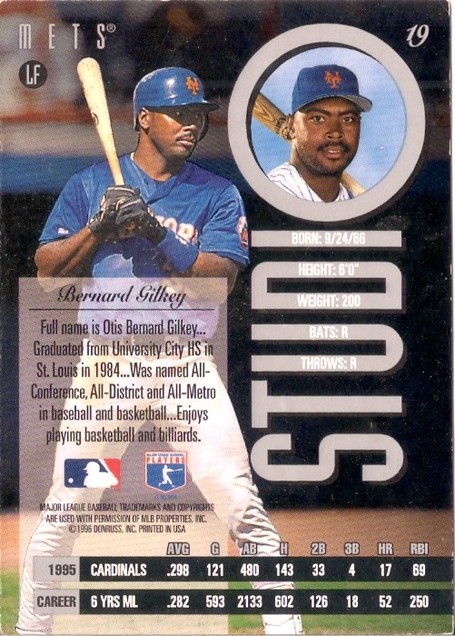