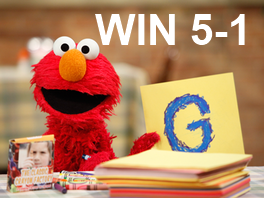 Coming off of a miserable start in Philadelphia last week, Dillon Gee threw six very strong innings against the Marlins in the nightcap of the series-opening double header. It wasn't the most efficient outing by a Mets starting pitcher - Gee threw 101 pitches in six innings - but the results were good: six strikeouts, two walks, and one run allowed.

Ricky Nolasco was not-too-shabby, too, but he gave up the first run of the game in the fourth inning when Ruben Tejada tripled to begin the inning, thanks in part to Mike Stanton's misplay down the right field line. Rube, as Keith Hernandez called him at least once during the broadcast, came home on a David Wright fielder's choice error by Greg Dobbs. Wright was awarded second base when Dobbs' throw went into the first-base dugout, but the Mets couldn't score again in the inning.

The only real blemish on Gee's record for the game came with one out in the top of the sixth on a solo home run into the bullpen by Dobbs. Jose Lopez followed up with a single, and Bryan Petersen grounded a tailor-made double play ball to Nick Evans, but Evans' throw to second base was botched by Jose Reyes. Despite the miscue, Reyes picked up the ball and stepped on the bag ahead of Lopez' foot, but Lopez was called safe by the second base ump. Luckily, Gee struck out Brett Hayes and Nolasco to end the inning.

With two outs in the bottom of the inning, Ruben Tejada was on second base, and Angel Pagan blooped a single into left field to score Tejada and give the Mets the lead. Nick Evans ripped a single of his own to move Pagan to second, and Willie Harris singled, too, to put the Mets ahead by two.

Pedro Beato took the mound to start to seventh inning and got a pair of outs before walking Logan Morrison with Mike Stanton in the on-deck circle. The walk prompted Terry Collins to turn to Manny Acosta, who plunked Stanton with a fastball just above the "S" on the back of his jersey. After Stanton made his way to first, the Acostalypse got Dobbs to pop up to third base to end the inning.

Reyes got his first hit of the game with one out in the bottom of the seventh, and he advanced to second on a wild pitch. He moved to third on a ground out by Tejada, and David Wright doubled right down the first base line to easily plate Reyes.

In the eighth, the Mets were able to add an insurance run. Nick Evans doubled off the Great Wall of Flushing with one out, and Mike Nickeas singled with two outs to drive him in. Nickeas was a dead duck between first and second base when Logan Morrison's throw was cut off, but he can be forgiven after unexpectedly bringing in a run.

The bullpen wrapped up the rest of the game rather nicely for the Mets, with Acosta striking out the side as he remained in the game for the eighth inning. Bobby Parnell was summoned in the ninth inning to make his second appearance of the day, and he threw a scoreless inning, striking out Morrison to end the game.

The victory completed the Mets' first-ever sweep of a double header against the Marlins. The five-game series continues tomorrow at 7:10 pm with Mike Pelfrey and Javier Vazquez listed as the probable starters. 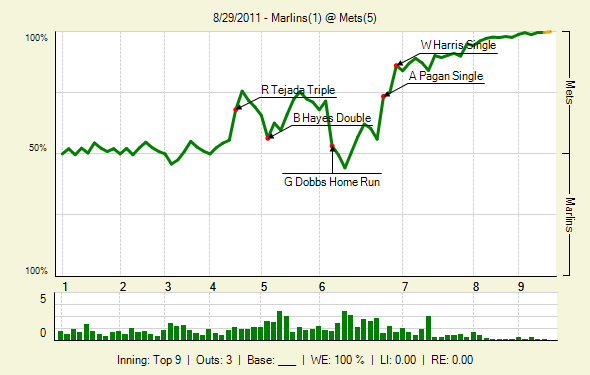