Share All sharing options for: Mets Daily Farm System Report 8/30 -- Schwinden and Harvey Picked Up by the Bats

*All results from games played on Monday, August 29th 2011

ROCHESTER 5, BUFFALO 6 (Box) Knowing the big club is probably watching, SP Christopher Schwinden pitched a passable six innings -- fanning six, walking a pair, and letting up four runs, including a three-run shot to a thirty-two-year-old minor league careerist. Passable, though, as big Chris exited with the 2-run lead. Whom did he thank? 2B Jordany Valdespin, who homered in his first at-bat. Salomon Manriquez, who cleared the table with a 3-run double. Raul Reyes, for adding a solo shot. And Luis Hernandez, whose triple provided the crucial sixth run that Rochester -- who touched the bullpen for a run in the 8th -- fell a hair shy of.

BINGHAMTON 7, ERIE 5 (Box) Every member of the Bingo nine collected a base hit, and two-thirds of our boys stroked two. Good thing, because Matt Harvey couldn't get the feel of a ball that sailed east and west of the plate; he walked four batters, chucked two wild pitches, and was tagged for three runs earned in a 5-inning start. With their hurler on the mat, the B-Mets batted around in their half of the third -- building an early 5-2 lead -- and tacked on a pair, including with a Den Dekker RBI single. In the bottom of half of the eight, RHP Brandon Moore surrendered back-to-back home runs to make his team sweat; but on a 15-hit night for Binghamton, the lead held. The B-Mets have won 14 of their last 16, a pretty remarkable climb to nearish .500.

ST. LUCIE 3, BRANDENTON 11 (Box) The Marauders raided and plundered the first offerings of SP Kyle Allen, hauling off five runs of booty in their first turn at bat. Who knew that total would double by game's end? Jefry Marte had a nice game, with a couple of singles and a run, though also an error -- the other lads mostly stunk it up. The Mets struck out twelve times, and made four errors in the field.

CHARLESTON 9, SAVANNNAH 6 (Box) Twenty-three-year-old right hander Gonzalez Germen is having a pretty good year, whiffing 110 batters in 117 innings, walking 34, and sitting at a 3.44 ERA. I regret to report that, last night, nine of the fifteen batters he faced singled, another one walked, and one hit a double. The arithmeticians had that as 7 runs earned in one-and-one-third of an inning. The Sand Gnats answered, bless them -- with a Ceciliani triple, a Blake Forsythe two-run double, and a few other nice knocks by Nieves, Cordero, and others; in fact the backstop (Cordero) reached base four times. But all that run-scoring was only good for clipping the Charleston heels.

In a pair of seven-inning games, Brooklyn looked sharp and dull, crisp and soggy, perennial McNamara champions and wildcard-chasing also-rans. That has been how it's been. In the first contest, twenty-year-old right hander Marcos Camarena struck out five and walked zero in five innings that were only spoilt by a solo home run. Meanwhile, Travis Taijeron -- in his second game back from a DL stint -- made all three Brooklyn runs with his bat, racking up a double and a gap-shooting triple. Game two was less sanguine; the Hudson Valley starter fanned nine and looked to close out his shutout -- until he was pulled in an irritating decision after walking one batter, up seven, with one out in the final inning. Brooklyn SP Eduardo Almada had nothing and was battered. Apart from another two hits by Taijeron, only Muno stroked a single.

Brooklyn's CF/LF Travis Taijeron (Pronounced: ty-RONE) was born in San Diego; his favorite athlete is Josh Hamilton; he hit over .400 both his junior and senior year in high school; in junior college he OBP'd .483; his junior year at Cal Poly Polmona he he hit .400 with RISP; in his final month as a collegiate, he slashed .542/.674/1.000, drawing 24 walks in that span.

High school and D2 numbers don't really mean a hill of beans, but point is, Travis has only ever been awesome, and the streak's continued in his first year of pro ball. The twenty-one-year-old center fielder is slashing .312/.407/.572 in 51 games, with 8 home runs and 5 triples. He hits lefties and righties equally well, and OPSed 1.135 in July before an August interrupted by a two-week turn on the DL. He seems to be in fine fettle now, as yesterday he went a combined 4-6 in two games, with a double, a triple, and three RBI. In the first contest he drove in all his team's runs; in the second, he provided two of their three hits. A beaming star! 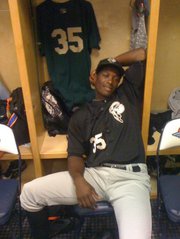