Marlins 6, Mets 0: I Will Pay The Famed Fisherman Quint Any Sum Of Money To Destroy The Marlins

Share All sharing options for: Marlins 6, Mets 0: I Will Pay The Famed Fisherman Quint Any Sum Of Money To Destroy The Marlins 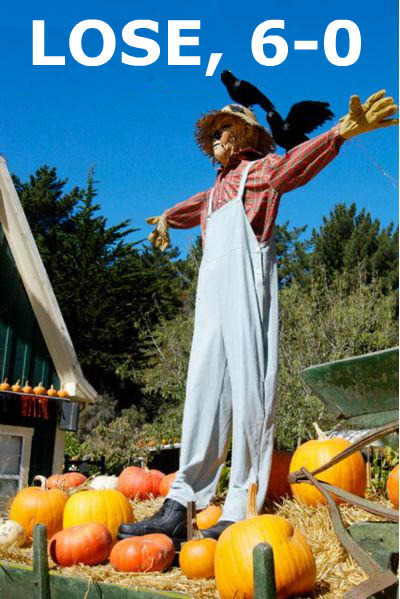 This ultimately meaningless game had more juice than it deserved, as the Mets' doubleheader sweep on Monday meant an opportunity for the rare five-game series sweep. And against the Marlins no less, the 2007-and-2008-ruining, brawl-starting, thorn-in-the-side franchise that has quietly tormented the Mets in recent years. Various jackasses of Marlins past -- think Cody Ross, Miguel Olivo, Scott Olsen -- have since moved on, but the stench remains. Hopes of a sweep disappeared after tonight's drubbing.

It wasn't always a blowout. The score heading into the seventh inning tonight was 0-0. Mike Pelfrey was pitching one of those classic Pelfrey games in which he strikes out hardly anyone yet holds the opposition scoreless. These games are usually followed by hard-hitting analysis from the pollyannas about his "poise", "tempo", "confidence", etc., when the real story is BABIP and left-on-base % fluctuation masking his inability to induce swinging strikes (he tallied just four on the night) and, ultimately, strikeouts (he notched three tonight). His deficient peripherals eventually caught up to him this evening.

Pelf allowed the first two batters to reach in the seventh, creating a runners on first-and-second, none out situation with Marlins pitcher Javier Vazquez at the plate. Vazquez predictably bunted as the Mets put on the "wheel" play, in which the first and third basemen charged as the middle infielders manned the corner bases. David Wright fielded the bunt and neglected to throw to third base to nail the lead runner, even though it looked as if he had a play there. Wright instead looked to get Vazquez at first, except second baseman Justin Turner was standing on second base instead of first. All runners were safe and it appeared that Wright and Turner were mostly to blame. It turns out Turner had put on a pickoff play for the runner at second, Mike Cameron, but Pelfrey delivered the pitch anyway for some reason. This left first base unmanned after the bunt (all of this info courtesy of Adam Rubin). Pelfrey then allowed an RBI single to Emilio Bonifacio and was pulled with the score 1-0 Marlins.

Tim Byrdak and Ryota Igarashi followed with some so-so relief work and it was 5-0 Marlins heading to the bottom half of the frame. With a resurgent Vazquez dominating the Mets' lineup, five runs was more than enough. Mike Stanton mashed an impressive oppo homer into the Pepsi Porch in the ninth inning to cap the scoring. There isn't much to offer about the Mets' lineup. Wright and Josh Thole each hit two singles but no Met had an extra-base hit.

Pelfrey's final line -- six innings, four runs, three strikeouts, four walks -- was poor, although he did induce more groundballs than usual. For the 23rd time in 28 starts, Pelfrey struck out fewer than 5 batters. He is by no means sub-replacement level dreck but wow, watching him pitch is not much fun.

Chris Capuano will start Wednesday night against the Fish, hoping to repeat his bananas performance against the Braves last Friday night. Chris Volstad is his opponent and first pitch is at 7:10 PM. 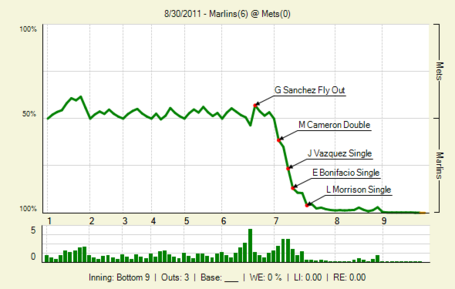