Isringhausen's return to the Mets was the feel-good story of spring training, and the fact that the Mets have gotten this much production from him for such a small amount of money is a credit to Sandy Alderson's administration, particularly J.P. Ricciradi, who watched him pitch and thought he was worth signing to a minor league deal.

Through the end of June, Isringhausen's ERA was significantly lower than his FIP or xFIP suggested it should be, mainly because he wasn't striking batters out while walking way too many of them. Since the beginning of July, his strikeouts per nine innings has risen, but he's still walking too many opponents to be considered a great relief pitcher.

Here's a comparison of Isringhausen's cumulative ERA by appearance and his FIP and xFIP on the season (click to embiggen): 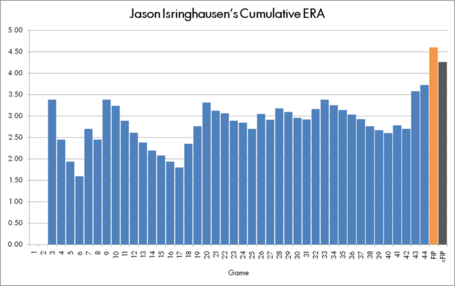 Wacky things can happy with relief pitchers since they throw so few innings over the course of a season, but it's definitely more likely that Isringhausen struggles a bit more than he succeeds for the remainder of the year. There's a reason that Sandy Alderson wasn't blown away with a trade offer for Isringhausen, after all.

All of this is not to say that Isringhausen is an awful relief pitcher, but at the very least, it's time for Terry Collins to hand over the closer gig to Bobby Parnell. Of course, I'd prefer that the Mets take the lead in abandoning that title, but short of that, it'd be nice to see the team's best current relief pitcher take over what is perceived to be the most important job in the bullpen.

Looking ahead, Alderson's Mets figure to invest significantly less money in a closer than the Minaya Mets did, something that was obvious when the season began but became even clearer when Franicsco Rodriguez was sent to the Brewers. During the game on Tuesday night, there was some discussion in the SNY booth about whether or not Parnell should stay in the game with the tying runner on second base in the eighth inning, and Keith Hernandez said, rather emphatically, that you have to leave him in because he's the closer of the future. Keith was right.