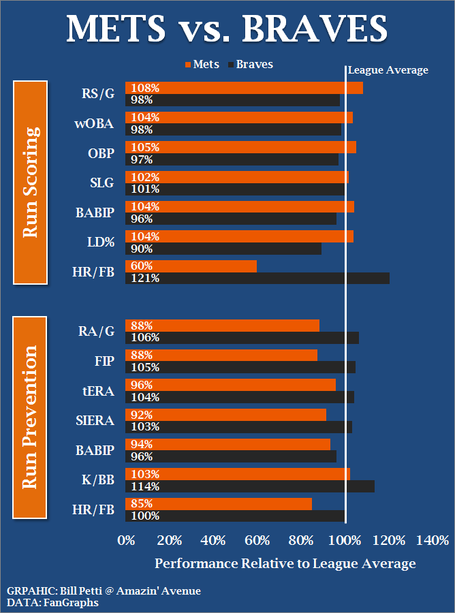 Both teams have been playing .500 ball of late, although the Mets have lost their last four games. The Mets remain the better offensive team, but the Braves' ability to prevent runs is even better no matter how you slide the data. The Mets have the 7th best offensive BABIP at home this year (.307), while the Braves have the worst when playing away from Turner Field (.263 vs. .305 at home). That being said, the Mets face Tim Hudson, Tommy Hanson, and Jair Jurrjens and the Braves have been pretty good at suppressing BABIP with those three on the road.

As good as the Braves have been this year their post-season dreams appear to lie with the Wild Card, and they currently lead that race by 2.5 games over Arizona. The Mets are 8 games back of the Braves. A sweep, and suddenly the last 2 months get real interesting. Anything less than that and the Mets are probably fixing their gaze squarely on 2012.

I'm feeling optimistic, but not blindly so. Mets find a way to take two out of three.

For more on the Atlanta Braves, be sure to check out Talking Chop.