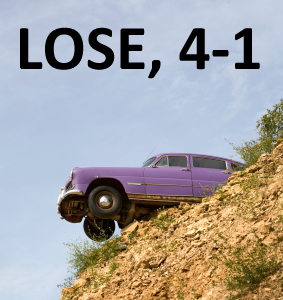 On Fiesta Latina Night at CitiField, the Mets took the field in special "Los Mets" jerseys. Earlier in the day, news they would be doing this prompted great weeping and gnashing of teeth on the interwebs (despite the fact that they've done this for several seasons running). In years past, these "new" uniforms consisted of little more than slapping a barely discernible "Los" somewhere on the cotton. But tonight, they Mets sported some amazing, never before seen blue tops with orange piping. If my Twitter feed is any indication, these new jerseys were a resounding hit amongst the fans and will hopefully be seen again--with or without the "Los"--in the future. (Though the Mets were apparently not smart enough to have these superfly unis on sale at CitiField tonight; otherwise, I'm sure they would have cleaned up at the various team stores.)

In the bottom of the first, the Mets rediscovered some of the two-out magic they'd grown so accustomed to. After Tim Hudson recorded two quick outs, Daniel Murphy shot a single between third and short. David Wright by blasting a ball that probably would have gone for a homer back at Shea (or virtually everywhere else). At CitiField, it banged high off the Great Wall of Flushing, allowing Murphy to score all the way from first.

After two solid innings on the mound, R.A. Dickey ceded a single to Alex Gonzalez. Tim Hudson (hitting in the eighth spot as Fredi Gonzalez did his best Tony LaRussa impression, sans easily bruised feelings) failed to bunt him to second, but youngster Jose Constanza did much better by lining a hit all the way to the warning track in right-center. Gonzalez scored easily, and only a good cutoff and relay from Duda prevented an inside-the-park home run. Not that it mattered much; Constanza scored soon thereafter on a Michael Bourn sac fly to give the Braves a 2-1 lead. Constanza also made his presence felt on two balls stung off the bat of Jose Reyes that he ran down in left, turning two potential doubles into two outs.

Fearless Dickey Houdini'ed his way around a few jams in the middle innings. A leadoff double to Freddie Freeman in the fourth went for nought, thanks to two excellent plays on hard-hit grounders by David Wright (who managed to remember how to throw to first) and Justin Turner (not a typo). He found trouble again in sixth when Martin Prado ran out an infield single, and Freeman belted a double, but Dickey worked his way out of it with by striking out Dan Uggla and getting Heyward to ground out. And in the seventh, David Ross reached on a Wright error (technically, several errors), only to be erased by on a groundball double play by Gonzalez (well turned by Turner despite a hard takeout slide from Ross).

Unfortunately, Hudson grew even stingier than Dickey as he cruised through the Mets lineup after his briefly rough first inning. He retired the next nine batters after Wright's RBI double and did not experience trouble against until he walked Angel Pagan with two out in the fourth. A bloop hit to Jason Bay just out of the reach of Jason Heyward might have allowed Pagan to score the tying run, had the ball not bounced into the stands for a ground rule double. Given this bit of luck, Hudson hit Lucas Duda (an HBP that had the look of a one-pitch "intentional walk"), then induced a harmless fly ball from Josh Thole to escape danger.

In the sixth, Hudson saw Freeman fail to field a throw that allowed Wright to reach safely with one out, but clamped down on the next two batters. He seemed to lose command with two out in the seventh, as he walked pinch hitter Willie Harris and fell behind 3-0 to Reyes. But after a called strike, Reyes unwisely swung under a high offering and popped out harmlessly to short, ending what qualified as a threat in this game.

With Dickey out of the game, the bullpen immediately got into odd trouble in the top of the eighth. The troublesome Constanza hit a ball off of Tim Byrdak's leg and easily reached safely for a single. Following a strange swinging bunt groundout by Bourn and the insertion of Ryota Igarashi, Prado hit a ball up the middle that he too beat out, putting runners at the corners. Freeman hit a hard grounder to third that got Constanza caught in a rundown.

However, the rundown lasted long enough to allow the runners to move to second and third, and both scored when Uggla finally broke through with a single, increasing the Braves' lead to 4-1. First base was open, Uggla had a 25-game hitting streak under his belt, and the next batter (Heyward) has struggled awfully of late. Why did Collins opt to pitch to Uggla rather than Heyward? As of this writing, no one knows, and at this point, does it really matter?

Three runs proved too big of a hill to climb. The Mets made a feint stab at a comeback in the eighth, when Murphy worked out a one-out walk against the un-walk-by-able Jonny Venters. and Wright hit a single to bring the tying run to the plate. But Pagan and Bay each swung at Venters' first offering and politely showed themselves out. DJ Carrasco took care of the Braves in order in the top of the ninth, but Kimbrel did the same in the bottom half, and that was that.

In order to have a slimmer of a ghost of a playoff chance (I know, I know), the Mets needed to sweep this series. That is already impossible. Really, they needed to win more than one game against the Nationals, or more than zero against the Marlins, while the Braves were experiencing their own struggles. But they didn't, and now they are now one game under .500 again and nine games out of the wild card. Even if the Mets take the next two in the series--and their history at home this season doesn't bode well for that outcome--we may have to concede it's all over but the shouting. Which would be fine, if they were at least a fun team to watch. But those two hideous losses against the Marlins, combined with this listless affair, seem to have drained much of the joy out of spending an evening with the Mets.

Just to rub things in, SNY did not show that hideous Guy Dying Loudly and Horribly of Emphysema PSA all night, leading me to believe they'd mercifully retired it, only to unleash it on us after the last out. I am begging you, SNY, either retire that monstrosity or allow me to opt out of it in some way. I swear I don't smoke, never have, never will, and don't want to lose my lunch every time I watch a ballgame. At least let the Mets do that for me. 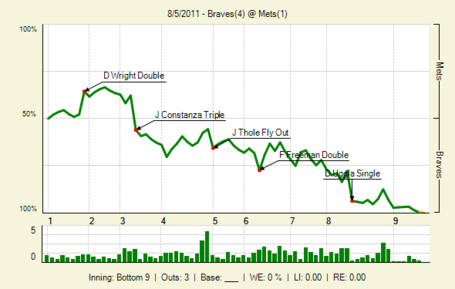 Nice job by NetsMets4Life; their effort in the game thread embiggens us all.