A little more than two months later, Gee's thrown 112.33 innings, 108 of which were over the course of eighteen starts. His ERA dropped to a completely unsustainable 2.86 on June 15 but now sits at a much more reasonable 3.93.

While that regression looks about right based on the numbers Gee was putting up earlier in the year, the problem is that he's now got a 4.49 FIP and 4.48 xFIP. There's a very good chance that Gee is line for even more regression.

The reason for the significant jump in his defense-independent stats is that all of a sudden, Gee is striking out very few batters and still walking them at a pretty high clip. Let's have a look at his strikeouts and walks per nine as of June 2 and as of today: 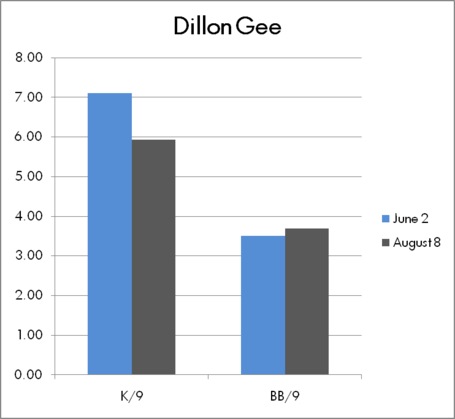 Gee's strikeout rate has plummeted from 7.1 per nine innings to 5.7 per nine innings, and his already poor walk rate has seen a slight uptick. It's still very early in Gee's career, but if his striekout rate dips to the level of Mike Pelfrey (career 5.06 K/9) while he's walking too many opposing hitters, things could get a whole lot worse.

The good news is that Gee still appears to be a major league pitcher who the Mets control on the cheap. If he's going to be anything more than a mediocre starting pitcher, he'll need to either walk fewer or strike out more hitters. It seems unlikely that the walks will drop significantly, and Gee's 2.0 BB/9 in his minor league career is deceptive. Over 211.1 innings of work in Buffalo, Gee walked 2.6 per nine, and an increase in walks comes as no surprise since he's now facing major league hitters.

It still looks like Gee is fit for a major league rotation, but it looks like he'll be thoroughly medicore.