Share All sharing options for: Mets 9, Padres 8: The Dudabides 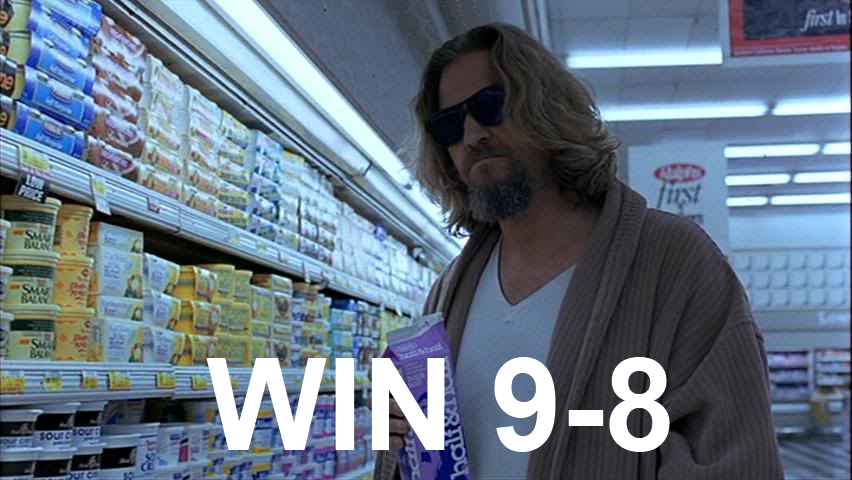 Mike Pelfrey and the Mets' bullpen were no match for the light-hitting San Diego Padres, a team began the night ranked twenty-seventh in baseball with 3.68 runs scored per game, but that didn't stop the Mets from winning the game.

It was looking pretty good in the early going. The Padres got on the board with a run in the first inning after Cameron Maybin singled and stole second with two outs and Jesus Guzman, the hottest hitter no one's ever heard of, singled to bring him home. San Diego's lead turned out to be very brief.

Angel Pagan began the bottom of the inning with a home run to tie things up, and in the second inning, Jason Bay hit a solo bomb of his own to put the Mets ahead by a run. In the third inning, Justin Turner led off with a single, and David Wright joined the home run party to put the Mets ahead 4-1. Padres' starter Tim Stauffer retired all but two of the Mets he faced after that through the seventh inning.

As for Pelfrey, everything went awry in the sixth inning. Jason Bartlett singled, and Maybin doubled to put runners at second and third with no one out. The Jesus followed up his second rib-eye single of the game to plate Bartlett and advanced Maybin to third, and Orlando Hudson, a player who I didn't remember was on the Padres, hit a sacrifice fly to cut the Mets' lead to one run. Guzman stole second and scored easily on Kyle Blanks' game-tying double. Pelfrey escaped the inning without allowing the Padres to take the lead.

Big Pelf stayed on to begin the seventh and got an out before walking Bartlett and giving way to Pedro Beato, whose spot on the roster is certainly helped by his Rule 5 status. Beato got through the seventh without issue, but he remained in the game to begin the eighth inning.

Beato and Ryota Igarashi combined to allow four runs to the punchless Padres in the eighth, but the Mets answered with a pair of runs in the bottom of the inning on a pinch-hit, two-run double by Queens native Mike Baxter, a ball that should have been caught by left fielder Kyle Blanks.

Jason Isringhausen pitched a scoreless top of the ninth, thanks in part to an amazing diving catch in foul territory by David Wright to end the inning, and then Heath Bell, who somehow is still stuck playing for San Diego after the trade deadline and loves to face the Mets, imploded. Jason Pridie singled and advanced to third on a strikeout by Pagan. Pridie moved to third on a single by Turner, and Wright singled through the middle to bring the Mets within a run. Lucas Duda stepped up to the plate and hit a twenty-hopper up the middle, and Turner and Wright both scored easily, giving the Mets the victory.

The Mets returned to .500 for the millionth time of the year. They may be very clearly out of the running for a playoff spot, but these are the types of games that keep you watching baseball even when your team is not on its way to the World Series. 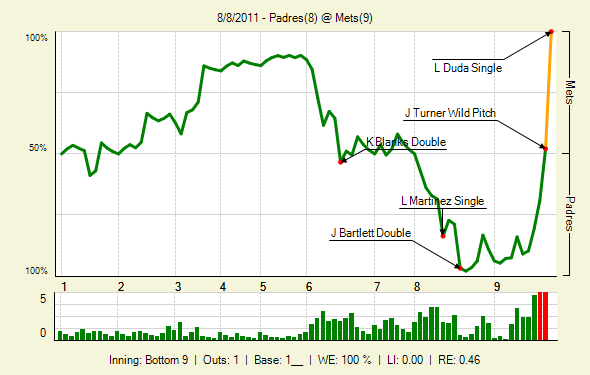 Nice job by MetsFan4Decades and Russ; her and his efforts in the game thread embiggen us all.