Share All sharing options for: Mets, Franchise Do Lunch with U.S. Vets

Contrary to popular belief, there is such a thing as a free lunch if you're a United States veteran.

One free lunch, anyway. Last Friday, the New York Mets in cooperation with the Iraq and Afghanistan Veterans of America organization invited a lucky cross-section of veterans from all military branches to Citi Field for all the vegetable lasagna and salted caramel brownies they could handle and a panel discussion with notable Mets dignitaries that dutifully served this country. Howie Rose moderated a panel boasting a veteran duality of Mets and military that included Ralph Kiner, Bud Harrelson, Ed Kranepool, Ed Charles and Joe Pignatano.

Oh, right. And the Franchise. Tom Seaver was there, too.

I would be remiss in my duties as your friendly neighborhood Mets blogger if I failed to inform you that I cleared everything from my goddamned schedule within an hour from receiving the illustrious blogger invite to see Seaver and company. I grew up with my older brothers regaling me with their Seaver stories from their respective adolescences, culminating in my father bringing all of them to Yankee Stadium on August 4, 1985 to see the Franchise collect his 300th career win for the Chicago White Sox at the expense of the Bronx Bombers on Phil Rizzuto Day.

Last Friday wasn't 300, though it would at least become my Seaver story to share with them. 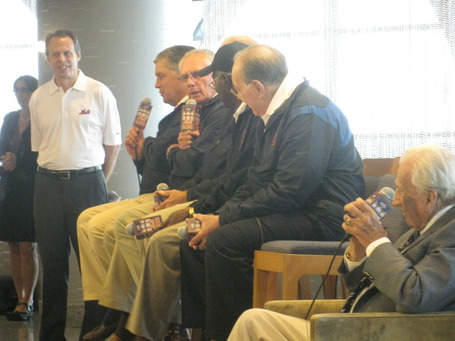 But I digress. The charm of last Friday's luncheon didn't just arise from being in the presence of actual Mets royalty, but emanated from the reason for the occasion -- an intimate dialogue about the confluence of military service and baseball. It wasn't just about the retelling of the 1969 Miracle Mets story one more time. It was about contextualizing it in a spirit for which the veterans in attendance could empathize.Think of it as the Mets' reinterpretation of a VFW, only without the wood paneling and cigarette smoke.

Kranepool reflected on being able to let baseball take the fans' minds off the Vietnam War, even after losing a father he'd never met to World War II. Kiner summarized his great enthusiasm at becoming a Navy pilot in World War II after calling to mind that he was playing baseball on December 7, 1941. Harrelson, who was born on another World War II milestone of June 6, 1944, elaborated on the life of an Army reservist that called professional baseball his day job. Pignatano remembered being assigned to play baseball in Germany while his younger brother endured hardships on the front lines in Korea. ("The younger guy got all the war, and I got the glory," Pignatano said with a pained irony.)

Charles, who like Pignatano was drafted during the Korean War but ultimately served in Germany, recalled a particularly poignant tale from a Far East press junket following the 1969 World Series. After discovering that talking baseball could help break the ice with wounded soldiers recovering from combat, the oldest '69 Met by age recalled speaking with one such soldier that had lost both legs in combat but could only concern himself with figuring out how to get from St. Albans Naval Hospital in Queens to Shea Stadium. Charles offered a quick resolution to the soldier's predicament by advising, "When you get home, give me a call and I'll make damned sure you get to Shea Stadium." 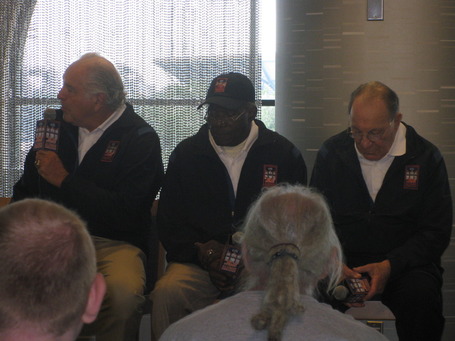 And Seaver... he delivered the gravitas. He clearly goes into "The Franchise" mode for these junkets, playing the role of the greatest Met there ever was with ease. It wasn't insincere, but his presence was more about downplaying his contributions -- Seaver repeatedly pointed out that "I'd never had a bullet shot at me" during his Marines Corps tenure -- and adding the one-liner or comment (when Kiner didn't) to keep the conversation light but not dismissive.

In one instance, Harrelson explained being away on Army reserve duty on the day when Jim Qualls broke up Seaver's perfect game in July 1969, only to have Seaver wish Qualls had gone with him. Charles later claimed that he made Seaver a great ballplayer, which Seaver deciphered to mean that he'd learned not to allow any ground balls to go to third when Charles was covering the hot corner.

But Tom Terrific didn't take things lightly. To hear him describe the impact his Marine Corps service had on his discipline, or the influence another ex-Marine, Gil Hodges, had on him introduced an intimate understanding of the experiences that Seaver had felt so deeply. Being there on Friday, giving his time to MLB's Welcome Back Veterans initiative... Friday's luncheon left no doubt that Seaver wouldn't have left the cozy confines of his secluded Napa winery if this weren't important to him.

So when the time came for us mere bloggers to address the Franchise, I pushed aside the questions I'd ask him over a beer -- whether anyone calls him George anymore, what wine would he recommend, what's his appraisal of the ex-Marine that's calling the shots these days in the Mets Front Office -- and asked the one thing I truly wanted to know after hearing about the Mets' military exploits.

Is it difficult to engage in a dialogue about his personal experience with the military?

"Not really," said Seaver. "It's a very positive issue to discuss. I've never had a bullet shot at me. The tree drill instructors in the U.S. Marine Corps - Fisher, Thompson, and Yoder - they came into my life in exactly the right time and turned the focus into the importance of discipline, which played a huge part of getting me to Cooperstown and the Hall of Fame. I was extremely disciplined, mentally and physically. It becomes that if you don't do certain things physically, how can you be disciplined mentally? There's a great weave of the threads of that mental and physical stuff that have to work together." 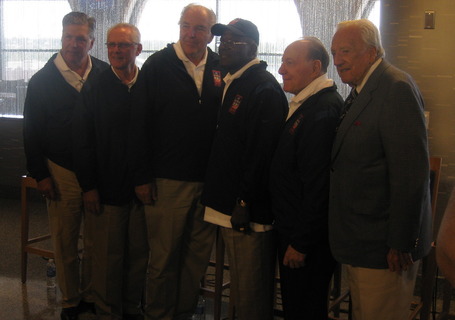 Weaving that thread made that luncheon necessary. As soldiers continue to head home from Iraq, Afghanistan, and elsewhere with the weight of war still bearing down on them, one of the first and foremost things that needs to be here to greet them is someone who can empathize. Someone who can talk the talk because they've walked the walk, while having the experience to say that whatever physical or mental struggle coming home with a soldier is not a battle they need to fight alone.

It was only 75 minutes long, but see if any of the veterans in attendance noticed the length of Friday's program after hearing about their favorite team's favorite sons talking about walking in those same government-issued boots. Or did they notice that they were basically talking shop with the players who once worked to provide the very necessary release that all soldiers and veterans as well as all of us need?

Seeing Friday's program made me proud to root for the Mets, if only because the organization continued its exemplary efforts to make us all proud of the real heroes.

Not bad for a free lunch.

The Real Dirty Mets Blog's Ed Marcus has a nice write-up of the Friday luncheon, while Media Goon over at Mets Police can hit you with the photo and video highlights -- including a great Ralph Kiner anecdote involving Jamie Lee Curtis and her mother's past relationship with the Hall-of-Fame Pirates slugger. And for more information about the Iraq and Afghanistan Veterans of America, just click here.