Share All sharing options for: Legendary Mets Hitters And Performance Versus Height

I was bored last night and started thinking about a player's physical attributes and how they might contribute to performance. Obviously, strength has a strong correlation to power; speed has a strong correlation to stealing bases, and in many cases defensive range and certainly an ability to hit triples (and inside-the-park home runs). But I wondered if there was any connection between things like height and weight and the likelihood that a player will excel in the big leagues.

So I grabbed the Top 25 Mets batters by rWAR as well as their respective heights and plotted them in Excel. I'm neither a statistics wizard nor an Excel expert, so you needn't worry that this post is about to veer off into Mathland. 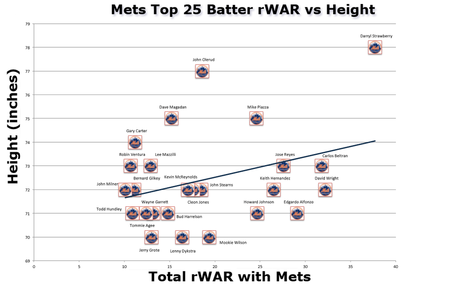 The dark line in the middle represents the "best fit" of the points on the graph, and would seem to indicate a weak direct correlation between height and player value. Were the line sloped from upper-left to lower-right instead, it would indicate a weak inverse correlation, meaning that taller players might be less likely to succeed than their more horizontally challenged teammates. But it's not, so the correlation is a direct one.

Correlation does not necessarily imply causation, but that's a topic for another day because, as you'll see in a moment, there probably isn't much of a correlation at all between height and performance, at least among the 25 players included in this sample.

You'll notice in the upper right of the chart above a point much higher and farther to the right than any other. That's Darryl Strawberry, the greatest — and tallest! — hitter the Mets have ever had. As our group of players is rather small, it wouldn't be extraordinary for one extremely tall, especially accomplished hitter to skew the results a bit, and that's exactly what Straw did to the chart.

Here's what the plot looks like with Strawberry removed: 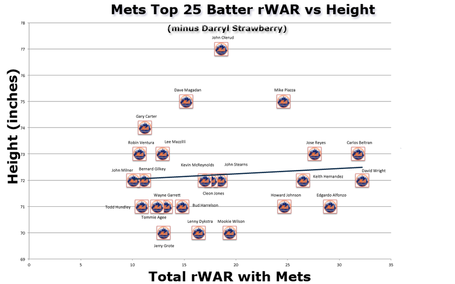 In other words, no correlation whatever. Of course, this wasn't really a comprehensive or even a scientifically sound analysis. For one thing, the data set was far too small to be meaningful, and there's also some survivorship bias here because we're only looking at players who "survived," i.e., stuck around long enough with the Mets to make the Top 25 list in the first place.

But it's fun to make graphs and use tiny Mets logos, so that's what I did.