So as you can see, today's card is a bit of a bonus. I was once again flipping through my old stack of Line Drive Pre-Rookie cards -- for some reason -- and former divisive Mets pitching Rick Peterson caught my eye. Now this was back during his minor league coaching career -- following his brief minor league playing career -- when he was a pitching coach for the Birmingham Barons, Double-A affiliate of the White Sox farm. Funny thing is he looks exactly the same -- perhaps the coat is underneath the jersey though?

But I quickly remembered that Scott Hairston is a third-generation major leaguer. So was that old guy his father? Or perhaps his granddad? Turns out that Sam Hairston is the grandfather of Scott and Jerry and has quite an interesting baseball story of his own. After a seven year career in the negro leagues -- where he played mostly for the Birmingham Black Barons -- Hairston was signed by the White Sox in 1950, appearing as one of the earlier black players in the major leagues. However, Sam only played in four games in the bigs -- batting .400/.571/.600 -- and after nearly ten years in the minors, he began a 30+ year career as a coach/scout for the Sox. Unfortunately, Sam Hairston passed away at the age of 77 back in 1997.

As for the random Pat Roessler, after winning the 1980 NCAA title with Arizona -- on the same team as Terry Francona -- he had a brief minor playing league career followed by a longer career as a minor league hitting instructor. He climbed up to the majors as the Expos hitting coach from '00-'01 and eventually served as the Yankees Director of Player Development through 2006. No Met connection though.

So there you have it, a 1991 Line Drive Pre-Rookie Rick Peterson & Sam Hairston card: 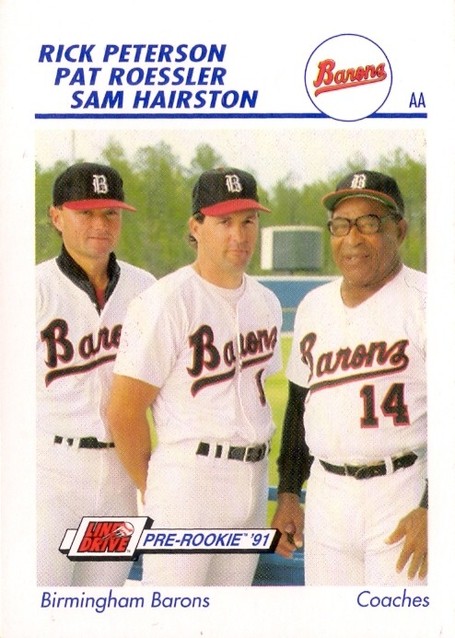 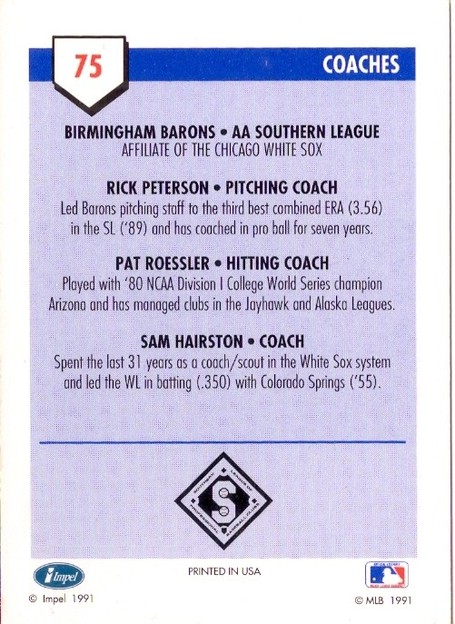