One Day in Kevlar

Share All sharing options for: One Day in Kevlar 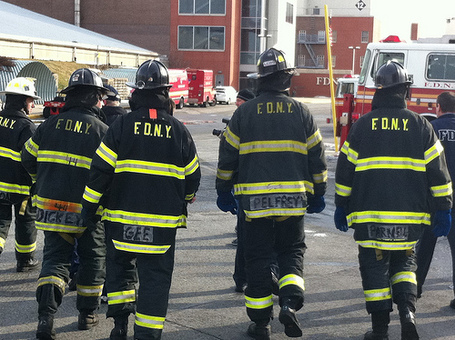 This was a story I put together back for that Teams of Class promotion earlier this season. It never made it up but I'm going to re-purpose it as it seems to strike the right note for tonight.

Since 9/11, the Mets have been hugely involved with the FDNY. What began as a symbolic tribute in the form of ballcaps led to donations, volunteer efforts and a great many firehouse visits. However, no Mets team has put their money where their mouth is and showed more class than the current crop of players that reside in Queens.

Specifically, I'm talking about a group of Mets that includes pitchers Mike Pelfrey, Dillon Gee and Bobby Parnell as well as Mets COO Jeff Wilpon. And of course, the modern day renaissance man himself, R.A. Dickey. This spartan crew assembled one frigid January morning on Randall's Island in the Bronx at the doorstep of the FDNY Training Academy prepared to cast off their uniforms -- and business suit -- and don the rugged attire of the firefighter.

For those of us lucky enough to be in attendance, it was a very cool, very humbling experience. We often look at professional athletes as more than men, modern day gladiators whose mighty exploits set them apart from us mere mortals. Therefore to see the clear air of reverence about them in the presence of the firefighters was powerful to say the least.

For the group of instructors present, there was visible excitement to meet major league ballplayers but the respect and admiration going in the other direction was even more palpable. And with good reason; whenever the chief fire instructor spoke -- with a baritone gruffness and a bit of what I guess I'll call paternalism in his voice -- everyone present suddenly became still. Players, media, everyone. Putting the unmistakable look of an awe-struck youngster at full attention in the eyes of 6', 7" Mike Pelfrey is no easy feat.

And so the ballplayers were firefighters for the day, taking part in various drills and activities that the academy students practice on a regular basis. No holds were barred. Parnell rappelled off the roof of a five-story building. Dickey and Pelfrey put out a raging car fire. The group as a whole crawled on all fours directly into a structure fire. It was when the last pitcher vanished into a haze of smoke, flames and wavy 500+ degree air that I remarked the sense of disbelief I felt that the organization was actually ok with this.

And when the day came to an end, the players signed countless autographs and posed for dozens of photos. To a man each one spoke about the newfound perspective he'd gained from the experience. But it was 25-year old Dillon Gee who probably summed up the experience best when asked if he had a newfound respect for his father, who himself is a firefighter in Gee's native Texas. Gee paused and then earnestly stated "No...because I've always respected my dad and this whole profession...What we do, facing hitters in front of a packed house, that's easy, that's a game. But what they do, that's the hard stuff, they're the real heroes."