Nationals 3, Mets 2: I Find Your Lack Of Wins Disturbing

Share All sharing options for: Nationals 3, Mets 2: I Find Your Lack Of Wins Disturbing 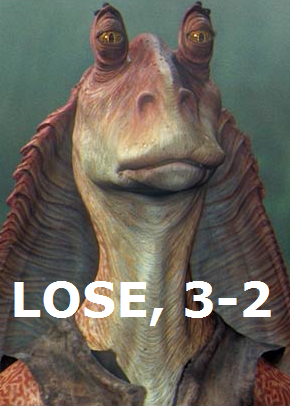 From my point of view the Nationals are evil! Well, maybe not as evil as the Phillies, Braves and Marlins but on Star Wars Night at Citi Field the Nats were the Death Star to the Mets' Planet Alderaan. That makes six losses out of seven games on the homestand, with chances of finishing at .500 decreasing every day.

The Mets opened up the scoring in the fifth inning tonight, when Lucas Duda singled home Jose Reyes and a hilarious Jayson Werth error allowed Ruben Tejada to score. But the runs dried up with the help of some failed sacrifice bunts by various characters in the fifth, sixth and seventh innings. True SABR Obi-Wan Ricciardi and Paul "d3p0" DePodesta looked on with horror at Terry Collins's failed bunting orgy. To paraphrase a wise man, sacrifice bunting in order to score more runs is like throwing things up in the air to try to eradicate gravity.*
Dillon Gee cut through the Nats in his first five innings like Anakin Skywalker's lightsaber through Tusken Raiders. But he lost it in the sixth, allowing two doubles and walking two batters as the Nats tied the game 2-2. Dale Thayer and Bobby Parnell combined to allow the decisive run in the seventh inning, with Ryan Zimmerman singling in the winning run against a beleaguered Captain Fastball.
Rick Ankiel threw out Josh Thole at the plate in the fifth with one of his now familiar proton torpedo throws. The man has a cannon. Duda and Reyes each collected three hits, but Duda struck out to end the game with runners on first and third. David Wright went 0-for-4 and will find a new definition of pain and suffering as he is slowly digested in the Sarlacc over ten thousand years.
Reyes was running gingerly tonight, making no attempts to steal a base despite various opportunities. It turns out his hammy is still "whammy", according to Adam Rubin, meaning it still feels tight. Reyes has not enjoyed a particularly inspiring second half, and has always pushed himself to play when hurt, so I can understand his motivation to play. However, the risk of further injury seems very real and his continued presence in the lineup does not seem wise. No one wants a repeat of 2009.

Many Bothans died to bring you this recap.
Our Padawans continue the series tomorrow at 7:10 PM, with Mike Pelfrey and Brad Peacock scheduled to start. Peacock is making his first major league start.
* - In most cases! 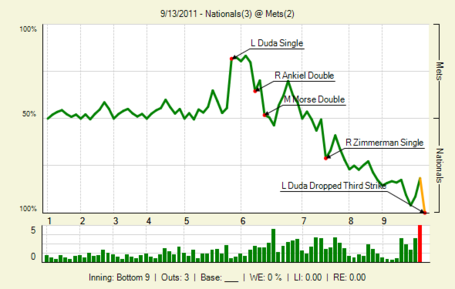