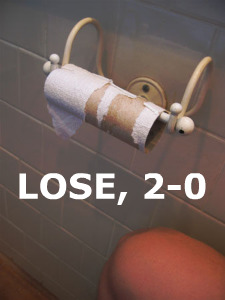 Terry Collins took out his camcorder in the ninth inning tonight to record Let's Kill The Rally... And The Umpire, the latest installment in his saber-snuff film series. With runners on first and second, none out and Justin Turner at the plate, Collins called for a sacrifice bunt. This was after Nats closer Drew Storen walked Jason Bay and Willie Harris to start the inning. Much like Ruben Tejada did last night, Turner popped up the bunt attempt and Storen caught it for out number one. After a Jason Pridie groundout and Jose Reyes lineout to a diving Rick Ankiel in center field, the game was over.

Collins has avoided the Jerry Manuel-style smallball most of the season, but he's gone buck wild of late. It's maddening. One can't help but think the failure of his players to successfully execute has led him to call for the bunt even more. My JV baseball coach once had the first nine batters in a game bunt just to prove his point that the team sucked at it. I feel like that is what's going on here.

Mike Pelfrey was uncharacteristically strong for the Metsies tonight, tossing seven innings while allowing two runs with six strikeouts and two walks. Both runs were unearned, as a David Wright error (his 17th of the season, yikes) jumpstarted the Nats' two-run third inning. Mike Morse and Jayson Werth each picked up an RBI single. Pelf threw 71% of his pitches for strikes, well above his season rate of 62%, while tallying a season-high 15 swinging strikes. He's usually painful to watch so praise to Pelf for making the pitching portion of tonight's game enjoyable. The same cannot be said of the batting portion.

It was a night of patience at the plate. No Mets starter averaged fewer than four pitches per plate appearance. They drew five walks. Yet no one could break through with a big hit against four Nationals pitchers. Brad Peacock went five innings, inviting the ladies' attention with an unusual outfit and stylish hat, while striking out two batters and allowing just two hits. Tom Gorzelanny, the nasty Tyler Clippard and Storen followed. Of four total hits, only Turner managed one of the extra-base variety. He hit a double off Gorzelanny in the seventh but nothing came of it.

The Battle For Third Place is intensifying. After tonight's loss, the Mets are now one back in the loss column to the surging Nationals. And don't sleep on the Marlins, who are just four losses behind the Nats:

The Mets will try to avoid the four-game sweep and salvage some dignity Thursday afternoon at 1:10 PM. Chris Schwinden and Tom Milone will square off.

Check out Carlos Beltran's 300th career home run, which he smashed into McCovey Cove earlier today. Yours is the sweetest swing I've ever seen. 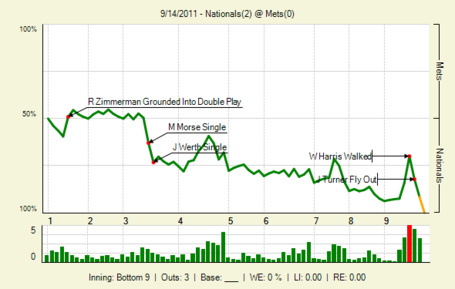