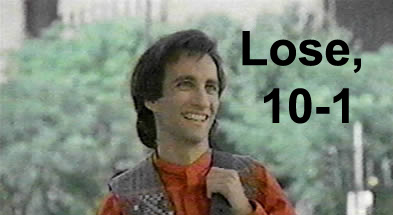 Chris Schwinden had a better time out in his second major league outing. And at least the Nationals' starter Tom Milone didn't hit another home run against the Mets. That doesn't mean this week's rain-soaked rematch was any easier to swallow than last week's loss.

At the core of this loss were two balky (Balki?) moments. In the bottom of the fourth, in a scoreless game, Angel Pagan singled to left off of Tom Milone with one out. Milone looked hittable, even if the booth was showering him with praise -- what with the Tom Glavine references and the lauding of his 'pitcher presence -- and it seemed like the Mets might be able to put something together. Tom Milone then caught him at first with what the booth called 'the best move in the business, ' and the 'Andy Pettite move from the pitcher with the 46 on his back.' It was a classic lefty balk move, the kind where the pitcher looks like he's going home but puts his foot down somewhere to the left of that imaginary 45 degree line and throws to first. Guess he's not a good pitcher to run on.

The second moment cost the Mets terribly. Daniel Ray Herrera came on in the seventh inning with the Mets down two to one. Steve Lombardozzi was at third and Ian Desmond at first base. Herrera didn't give Johnny Gomes much to hit. With the screwball coming, it seemed like a ground out (double play even?) might be on the way. Then Herrera got his hand stuck in his shirt. Balk. Run Scored. It's just so ridiculous!

Henry Rodriguez tried to help us out in the bottom of the seventh. With 98-MPH cheese and control problems, he's both O. Henry and Oh Henry! He got two outs, but he also walked the bases loaded. Then Todd Coffey sprinted his 300 pounds out to the mound. David Wright was up with two outs and rain on the way! His big fly ball didn't cut the rain and ended up Michael Morse's glove, though. All was not lost... yet.

It all fell apart in the eighth and the team never recovered. Pedro Beato wasn't great, Angel Pagan lost a ball in the rain (maybe), Ian Desmond hit a seeing-eye single past the drawn-in infield, and Ryan Zimmerman hit a no-doubt double to pus the score to 6-1 and nail the coffin shut.

There were a few other notes worth getting to. Chris Schwinden was a little more relaxed this time, and did hold the Nationals to one run in five innings, but his stuff is really not impressive. Even when he struck out Morse on a high cutter, it seemed to be more of a failing of Morse's than an achievement for Schwinden. Perhaps that's being to reliant on the gun -- Schwinden only hit 90 as a maximum velocity -- but he didn't get the swinging strikes either. Six on 79 pitches, and five of those on the four-seamer. That's pitching backwards, since it's usually your non-fastballs that get the swinging strikes.

Newly a submariner, D.J. Carrasco had an eventful sixth. Looping those pitches in from the side-arm slot led to two ground balls and a hit batsman, but as Ralph Kiner mentioned, they should really do something about that body armor. Danny Espinosa leaned his elbow guard right into the pitch and took his base. Good thing Ruben Tejada made a nice leaping double-play over the bag at second to finish off the inning. His seventh didn't go as well, as he allowed two straight singles to Lombardazzi and Desmond to set up the Herrera balk.

Manny Acosta looked more like Acostapalypse than anything. An error on Wright, sure. He's in a fielding slump as they say. But then a double from Danny Espinosa, a single from Wilson Ramos ("whatever book they have on Ramos they should burn in the offseason"), a single from Roger Bernadina and a big double for Desmond (for his fifth hit of the game). That's a terrible inning ("rope after rope"). Perhaps the team should have given the guy with a triple-digit fastball a few more chances in the role?

At least Jason Bay looked okay. "Bay had a great fastball right in his wheelhouse there and did not make good contact" said Kiner about Jason Bay in the sixth with David Wright on second base. Then Bay pulled a screamer to left that would have left many parks. It dunked off the Great Wall of Flushing, and he barely beat the throw to second. He added a second double in the eighth, but also struck out twice. We'll see if this new Bay holds.

It was a tough day. Kudos to any that watched or were at the game through the rain.

Unintentionally Sexy Quote of the Game: "Get that man a smaller shirt," Gary Cohen on Daniel Ray Herrera