Mets 12, Braves 2: Just Fifteen Games Back Of The Wild Card!

Share All sharing options for: Mets 12, Braves 2: Just Fifteen Games Back Of The Wild Card! 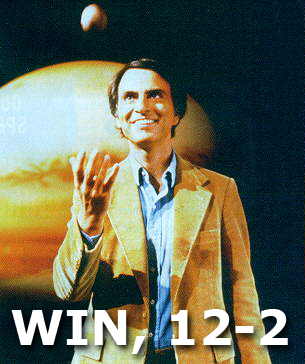 In what many will perceive as a clear response to Terry Collins's tirade from one night ago, the Mets humbled Derek Lowe and four Braves relievers en route to a 12-2 win, the twelve runs representing their highest total ever at Turner Field. The win pulled the Mets to within fifteen games of the Wild Card, and with just eleven games remaining in the season they clearly have their work cut out for them. As for whether the Mets "folded it up" on Thursday night as their manager apoplectically asserted in his post-game presser, or whether tonight's run-scoring orgy was the team's energetic retort, I suppose there might be a kernel of truth to those assertions. I suppose it's also possible that the Mets had a bad day yesterday and a great day today, because sometimes that happens to a team.

The Mets scored early and often tonight, plating four runs in the first on a two-run home run by David Wright (= TRAID) and a two-run single by Ruben Tejada. They tacked on a couple more in the third when a Josh Thole single chased home Lucas Duda and Jason Bay, and notched another four-spot an inning later on Wright's three-run home run and an RBI single by Nick Evans.

In the bottom of the fourth, with none on and two out, one of the seemingly countless Alex Gonzalezes cracked a deep fly ball to left field that seemed ticketed for the first row of seats, but Gonzalez will be blaming Canada for the foreseeable future because Bay leapt skyward and by golly he reached over the wall and he snared that would-be homer dontcha know: 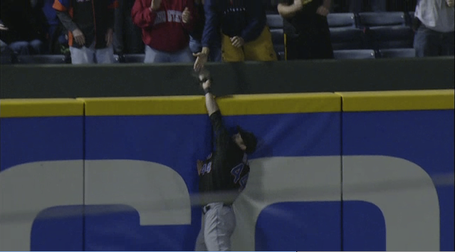 All told, the Mets pounded out 20 hits and drew four walks against Lowe and a quartet of ineffective Atlanta relievers. Duda collected four hits for the second time this season. Jose Reyes went 3-for-5 with a walk, raising his average to .334, four points ahead of Ryan Braun. Nick Evans and Josh Thole had three hits apiece while Bay went 1-for-5 with a couple of walks.

Chris Capuano allowed two runs on six hits and a couple of walks while striking out six over a half-dozen innings. Miguel Batista, Tim Byrdak, Josh Stinson, and, hey, why not?, Ryota Igarashi pitched a string of hitless, scoreless single innings of relief to close out the game.

The series continues when R.A. Dickey and Tim Hudson lock horns at 4:10pm EDT on Saturday on FOX. 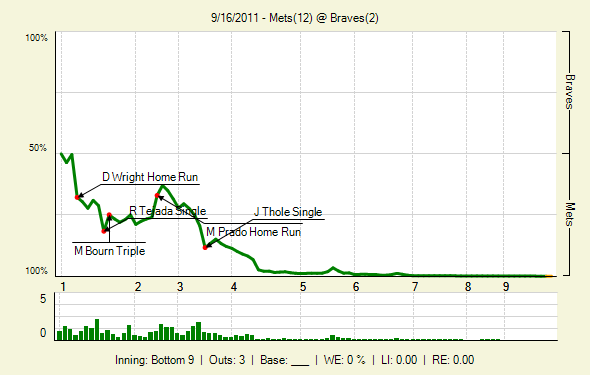