A chapter a night is the plan this week. The tale of Scott Hatteberg is told in "Chapter Eight: Scott Hatteberg, Pickin' Machine". The former big league first baseman/catcher receives fourth billing in the Moneyball movie and is played by Chris Pratt of Parks And Recreation fame.

This is one of the more human-elementy chapters of Moneyball. Outside of some talk about strikeout-to-walk ratio for hitters, discussion of numbers is scarce. Hatteberg was identified in Chapter Seven as one of the players brought in to replace Jason Giambi. As the seemingly embellished story goes, Hatteberg became a free agent at midnight on December 20, 2001, and Paul DePodesta was on the phone with Hatteberg's agent at 12:01 AM. Hatteberg signs with the A's and Billy Beane tells him he will play first base. One problem: Hatteberg has only played catcher in his career.

The story of A's infield coach, and current Texas Rangers manager, Ron "Wash" Washington teaching Hatteberg a new position is the highlight of the chapter. Wash isn't too keen on sabermetrics but is good at his job, which often entails turning the heavy-hitting but ungraceful players Beane acquires into passable fielders. Commenting on his experiences with these players, Wash says:

I seen some sh*t. I can tell you that.

Wash's strategy for transforming Hatteberg into a first sacker is to build up his confidence. Not a bad word is spoken about Hatteberg's horrendous defense as he learns at spring training 2002. Gradually, he improves at the position. It is at the easy end of the defensive spectrum, after all. Whenever he picks a throw out of the dirt, Wash yells "Pickin' machine!" from the dugout. It sounds like a story out of little league -- coach teaching player using positive reinforcement and sideline screaming -- but it works. And Beane has his high-walk, low-strikeout, plate discipline hero in the lineup everyday.

Dan Feinstein, the young man in charge of the A's video room, was mentioned in Chapter Seven but receives additional coverage in Chapter Eight. He has a testy exchange with A's outfielder/first baseman John Mabry, in which the two discuss facing Jamie Moyer. Feinstein offers advice but Mabry has none of it, asking "Have you ever faced a major league pitcher?" The video man has an ally in Hatteberg, as the two favor a patient approach at the plate. Feinstein has moved on up in the baseball world and is now Director of Baseball Operations for the Tampa Bay Rays.

Finally, here is a nice process vs. results quote from Hatteberg:

Here I go 0-for-3 with two lineouts and a walk and the general manager comes by my locker and says 'Hey, great at bats.'

1. In general, which do you prefer: a team of heavy hitters/poor fielders or a team of light hitters/strong fielders? Why? Assume similar overall value for each team.

3. Here is a picture of actor Minor Watson, cigar in hand, who portrayed Dodgers GM Branch Rickey in The Jackie Robinson Story: 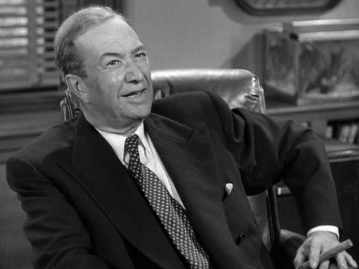 Here is Brad Pitt, hanging out in the A's video room, who portrays Billy Beane in Moneyball: 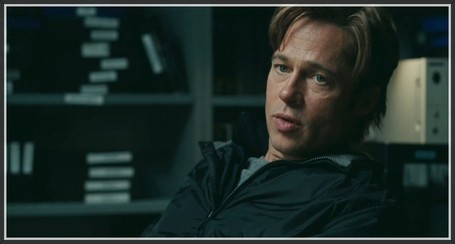 Which actor would you prefer play you in a movie? Serious question.

4. Do you think you would enjoy working for a Major League Baseball team in a similar capacity as Feinstein with the A's? Think a video room analyst or a low level scout. Long hours, low pay.