Share All sharing options for: Mets vs. Cardinals Saber-stat Preview 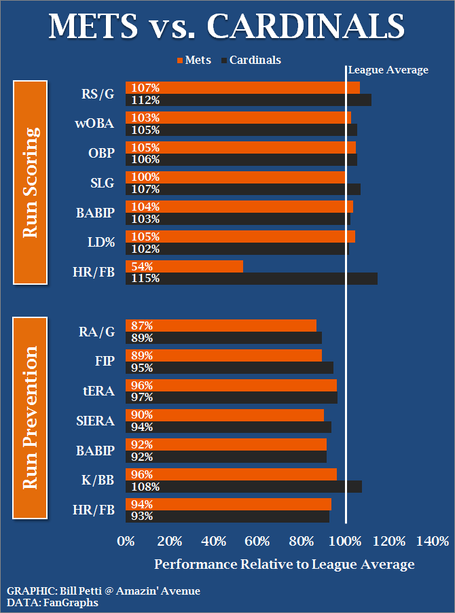 The Cardinals, once thought dead, have cut the Braves lead in the Wild Card down to just two games in the loss column (thanks in part to the Mets taking two out of three against Atlanta). It's a tough position to be in as a Mets fan--helping the Cardinals by beating the Braves.

The Cardinals have the edge in the power area, which accounts for the difference in run scoring. Both teams' run prevention has been pretty meh, but the Cardinals do a better job of keeping runners off base via the walk (roughly half a walk per game).

Cardinals pitchers have been better home than away, and it's the exact opposite for the Mets.

Cards are surging, and have the Wild Card in their sights. Cardinals take two out of three.

For more on the Cardinals, check out the always excellent Viva El Birdos.