Cardinals 11, Mets 6: The Bullpen Keeps the Cardinals in the Wild Card Race

Share All sharing options for: Cardinals 11, Mets 6: The Bullpen Keeps the Cardinals in the Wild Card Race 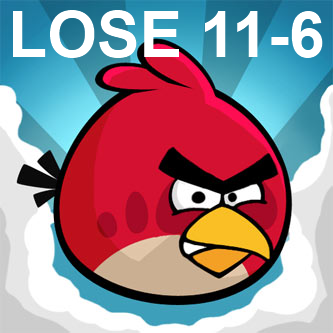 Having taken two of three games from the Braves over the weekend, the Mets began their final road series of the year with an attempt to spoil the Cardinals' hopes of catching the wild-card-leading Braves.

The Mets got on the board quickly after Jose Reyes singled to begin the game. Angel Pagan singled, too, to put runners on the corners, and after David Wright struck out, Lucas Duda doubled to easily score Reyes. For no good reason, Willie Harris came up next in the order, and he struck out, too. Nick Evans did what all he could to put more runs on the board, but his laser-beam line drive went directly to the Cardinals' left fielder.

Mike Pelfrey kept the Cards off the board in the first couple of innings, and the Mets extended their lead with a big inning in the third, which made for good timing for SNY viewers as Sandy Alderson was visiting the booth for an in-game interview.

Like the first inning, the third started with Jose Reyes reaching base, this time via with a walk that surely made Sandy smile. Pagan attempted to bunt Reyes to second, but Edwin Jackson threw the ball away, allowing Reyes to move to third and Pagan to reach second. Wright grounded out to score Reyes, and Pagan moved to third on an ensuing wild pitch by Jackson. Duda then walked, and Harris hit a slow grounder on which the Cardinals forced out Duda at second base but Pagan scored easily. A pair of singles by Evans and Josh Thole brought in the Mets' fourth run of the evening.

Handed a rather large lead, Mike Pelfrey did his best to get the Cardinals right back in the game. It started with a double by Jackson, the opposing pitcher, who scored on a Rafael Furcal double. Allen Craig singled, and Albert Pujols grounded out but brought in a run to cut the Mets' lead to two. One out later, David Freese doubled to bring the Cardinals within a run of the Mets.

In the fifth inning, Pelfrey helped his own cause by driving in a run with a ground-rule double, but he surrendered a two-run double to Lance Berkman in the bottom of the inning which tied the game at five.

Edwin Jackson was done after five innings, and Pelfrey made it through the sixth inning without further harm. After that, it became a battle of the bullpens.

Kyle McClellan, having thrown a scoreless sixth inning, remained on for the seventh inning for St. Louis. He loaded up the bases and walked in the go-ahead run, but Octavio Dotel was summoned from the bullpen and struck out David Wrong with the bases loaded to end the inning. TRAID!

The lead was short-lived. Very short-lived. Josh Stinson took the mound for the bottom of the seventh, and the game got ugly. After recording a pair of outs, Stinson gave up two singles and a walk to load the bases, prompting Collins to bringin Tim Byrdak. Tony La Russa countered by sending Ryan Theriot to the plate, and he hit a ground-rule double to score the tying and go-ahead runs.

Byrdak intentionally walked Yadier Molina, and D.J. Carrasco came in to face pinch-hitter Adron Chambers, who most fans probably hadn't heard of until the at-bat. Of course, Chambers tripled to clear the bases, and the Cardinals had an 11-6 lead.

The rest of the game went quietly, and the series continues tomorrow evening at 8:15 pm EDT with Chris Schwinden and Jaime Garcia slated as the probable starting pitchers. 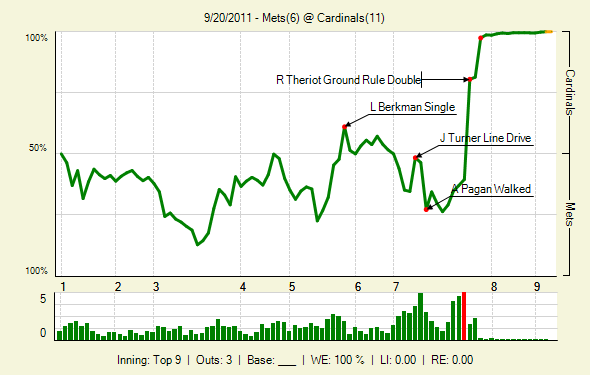