Share All sharing options for: Transcript of Omar Minaya's Interview on SNY 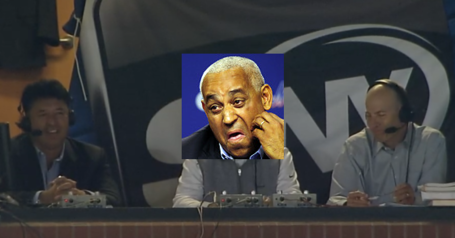 During the top of the third inning of the Mets' series-opener in St. Louis last night, Omar Minaya joined Gary Cohen and Ron Darling in the SNY booth to talk about the organization's prospects, offseason plans, and potential changes to Citi Field.

Here's the full transcript of the interview:

Gary Cohen: What do you see right now from this team, as we head through the final nine games of the season, that you like, and what do you see that you don't like?

Omar: Well, Jerry, there's a lot that I see on this team and on this team I like what I see. Would we like to improve our team maybe, y'know, before these last nine games? Sure, what team doesn't? But I talked to Jim Bowden today about some middle relievers I thought might, y'know, help our club win ballgames, and he informed me that the trade deadline passed and also that he no longer works for the Nationals. So in conclusion, I'm really comfortable with the guys we got now.

GC: Obviously the first thing that you're going to have to do is figure out whether you can re-sign Jose Reyes. How deeply into the process of figuring out your strategy have you gotten at this point?

OM: Obviously we've got a plan, and our plan, I like our plan. I've had a number a good discussions with Jose's agent, including earlier today. And y'know, basically where we're at is that Jose's agent and Fred are going to try to get a contract done and they'll let me know what happens, if something happens.

Ron Darling: With the trade this summer of Beltran for Zack Wheeler, you're starting to really get a good number of young arms down in Single-A ball. In your experience, what's the most important thing in developing young pitchers in your own organization?

OM: Exposing their virgin eyes to the unclothed chest of Tony Bernazard, shocking their ACL and UCL tendons into an injury-preventing tension.

RD: There was a time when organizations would probably take more time than less time with their pitchers. Do you think you'll do more of that? In today's game they seem to, not rush the pitchers, but there's immediacy for what you pay them and what you want from them as early as you can get it.

OM: Right now, we're focused on using our pitching depth to shorten these games. It's well know that in the past, our late-inning play depth, our play hasn't been ideal, in the late innings. Right now, y'know, we look at these young pitchers and ask: A. Can he help us in the mop-up bullpen role or B. Can we trade him for a veteran reliever, preferably age 35+?

GC: You talk about the bullpen, and I know you've identified that as being a key concern going into next year. When you look at putting together a bullpen, I know it can be a very difficulty thing to do because performance changes from year-to-year, but do you need to go into the offseason knowing who the anchor - the closer - is going to be, or is that something you feel you can work on when you get to spring training?

OM: Yea, y'know it's tough...[unintelligible]...[laughs]...but you got to ask yourself: has this guy gotten it done in the past? Performances change from year-to-year, but if a guy has gotten it done in the past, either last year, or in the early days of the Expos expansion teams, I gotta go with that guy. My philosophy is start with the closer, and the rest will fall in line. You can't have a seventh inning guy unless you've got a ninth inning guy, y'know? [laughs]

OM: What does the closer have to do with my going outside? I lobby Jeff to go outside more, but he says I have to wait for recess.

GC: And if he's not, and you don't want to overspend, how do you then approach the market?

OM: Basically, I make a list and I go down the list and ask my baseball guys what they think. Y'know I might ask Tony, "Tony, what do you think of Luis Ayala?" And Tony might say, like he did yesterday, "You ran him out of baseball, O." And maybe then I say, "Ricardo Rincon?" And Tony says, "Same deal." And then I ask Tony what he thinks, and maybe he says, "O, you had to fire me, remember?" And then maybe I go to Fred's office and ask if I can help look for the closer... So, y'know, we're weighing our options right now.

GC: As you look at the starting pitching going forward, obviously you're going to get Johan Santana back next year. Other than that, do you see making changes in your starting rotation, or do you think you'll have substantially the same pitchers back?

OM: Our guys...I like our guys. Though I've got my scouts in Harrisburg right now, checking out a potential free agent or two that could help our staff.

RD: As far as the everyday players, he's not in there tonight because he's not feeling well, Jason Bay, you have to be happy the way he's kind of turned it around the last month.

OM: *Hits the cough button* IT WAS ALL JEFF'S IDEA YOU'VE GOT TO BELIEVE ME. *releases cough button* Jason...he's a good kid, I'm not worried.

GC: The last time we had you on, we talked about Ruben Tejada. Tejada, at that point, was embarking on a pretty good stretch of games, because Reyes went down on the two separate occasions. We've gotten to see a lot of Ruben over the last two months. Have you seen enough to know what you've got here, and that should Reyes leave or should he stay, that you've got a guy who can be a starting big league palyer next year?

OM: We've been very impressed with Ruben so far, but he's still get a lot of room for growth. He's been walking a lot lately, and I've been talking to our coaches about getting him to swing more, y'know go the other way late in the game, putting the ball in play.

GC: Let me ask you about Daniel Murphy because it's a question we get all the time. What do you guys envision doing with Murph when he's ready to play again?

OM: We've seen Murph play about 10 innings at every position now, so it's pretty clear to me he can't play anywhere. At this point, Fred's going to try to leverage those pictures of Selig he has for a loophole in the DH rule.

RD: It's nice in this innng, we've seen it in the first inning with Reyes, that first-to-third has to be something that's almost automatic for this ballclub moving forward, those are little areas that the team certainly can get better at.

OM: We've got a lot of basecloggers on this team, but I'm thinking we could package several of these young players and maybe get a Juan Pierre-type back in the offseason.

OM: Yea I see the ballpark changing to remove my office! [laughs]...[sobs]