This is the tale of Chadwick Lee Bradford. Here is "Chapter Ten: Anatomy Of An Undervalued Pitcher". 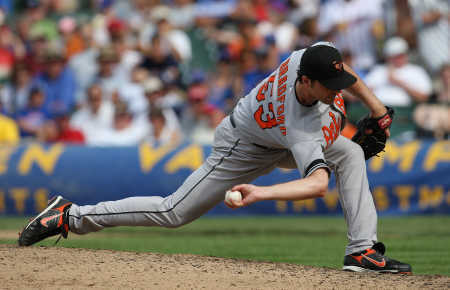 Bradford's journey from 13th round White Sox draft pick to A's relief ace is recounted. He is taught in high school to drop his arm angle from 12 o'clock to 2 o'clock by Bill "Moose" Perry, his baseball coach and also the chapel leader for the Mets' Double-A team in Jackson, Mississippi. As Bradford continues to move up the ranks, from community college to the minor leagues and eventually the big leagues, his arm drops even lower, eventually to the point where it can't drop any more. And he enjoys increasing levels of success. The White Sox, viewing him as organizational filler, trade him to the A's for Miguel Olivo, with Paul DePodesta the driving force behind the deal. The A's have big plans for the groundball machine with superlative minor league statistics. Bradford goes on to pitch four effective seasons for the A's, with 2002 his career year.

The Bradford story is interwoven with discussion of defense independent pitching statistics (DIPS), the groundbreaking discovery by Voros McCracken. Click here for McCracken's original Baseball Prospectus writeup about DIPS. For the unaware, the idea behind DIPS is that pitchers have little control over the fielding of a ball once it is put into play. Therefore, outcomes the pitcher has more control over -- strikeouts, walks, groundball percentage, flyball percentage, home runs -- are more useful than ERA or W-L record for determining pitcher effectiveness. Some examples of DIPS are FIP, xFIP, tERA and SIERA. Moneyball provided my introduction to DIPS and remains one of the bigger "WOW" moments of my intellectual existence.

The A's Big Three pitchers, Mark Mulder, Barry Zito and Tim Hudson, are brought up in the chapter. A frequent refrain from the anti-Moneyball chorus is that the A's owe their early 2000s success to that trio and not the front office's ability to find cheap, undervalued walk machines. My response is that there might be something to that argument, but why shouldn't the A's front office be credited with drafting them? Mulder was a stud #2 overall pick, but Hudson and Zito were question marks for various reasons. The A's spent draft picks on them as other teams cast doubt on Zito's velocity and Hudson's size.

A poem Bradford composed at age eight entitled "What I Want To Be When I Grow Up" is presented in the chapter. Here it is:

1. General discussion of DIPS. What was your first introduction to the concept? Do you subscribe to it? Which pitching statistics do you prefer?

2. Of Bradford and Darren Oliver, two effective but one-season-and-done relievers on the 2006 Mets, which would you have most wanted in the bullpen from 2007 onward?

3. Sean Green tried to reinvent himself last season as a Bradford-style submarine pitcher and failed miserably. D.J. Carrasco is apparently now trying the same. What are the chances, in percentage form, of the transformation being successful?