UPDATED: No Sign of Rebound for Wright's Performance on Fastballs

Since moving to Citi Field, Wright's offensive numbers look very different. He's failed to post a wOBA over .370 since the move and that drop in performance coincided with a drastic increase in his strikeout rate (16% before 2007, 23% after).

While we like to make fun of the more outlandish "TRAID DAVID WRONGZ" chatter that emanates from some circles, there is a legitimate discussion to have regarding Wright's likely performance in the future and how the Mets' front office should handle Wright in the greater context of roster construction and talent management.

Wright will be 29 years-old at the start of the 2012 season. Wright is under contract for 2012 ($15.25M) and the team has a club option for 2013 ($16M with a $1M buy-out). Pair up declining offensive numbers and defensive performance and it leads to the inevitable question as to whether Wright should be in the team's plans after 2012.

While I don't want to ignore defense, Wright plays third base and as such a team can tolerate less than average defense if he's providing solid offensive numbers. The question, of course, is what will those numbers look like in the future.

To get a sense of what lays ahead for Wright I decided to compare his pitch f/x numbers from 2008 (his last great offensive year and his last at Shea) to 2011 to see whether there are any signs that the old Wright might reemerge in the near future.

The graphic below compares Wright's wOBA per swing in 2011 to 2008. Even given the general decreasing run environment from 2008 to 2011 (wOBA overall is about 4% lower now then in 2008), Wright's performance still has not rebounded close to his 2008 levels. His overall wOBA/swing this year is .149 compared to .168 in 2008. Adjusting for league differences, that's still a decline of about 7%. 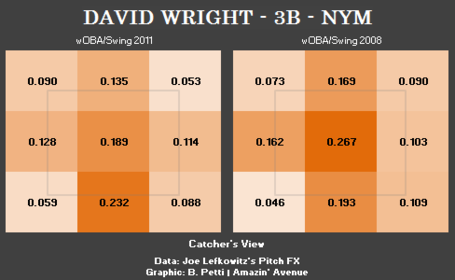 The biggest difference for Wright seems to be on belt-level pitches located inside and over the middle of the plate. He's simply not doing as much damage on those pitches as he used to. The one area of real improvement is on pitches low in the middle of the plate, which is nothing to sneeze at since these pitches make up 14% of all pitches he saw this year and he offered at almost half of these pitches.

Wright's also showing more pop on balls down in the zone than in 2008. This year he's slugging .221 per swing on those pitches compared to .193 in 2008, a ~30 point improvement. However, that has come at the expense of production on high pitches (13 point decline) and, most importantly, in the middle of the zone (80 point decline).

More importantly, Wright's troubles on pitches in the middle of the zone is most pronounced on fastballs*: 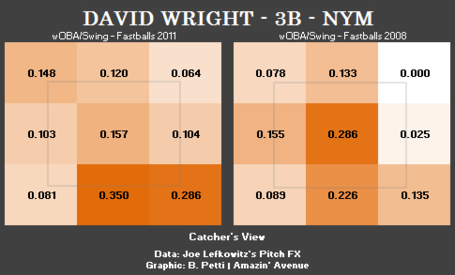 It's amazing how different the data looks between the two years. Granted, the sample is smaller in 2011 than 2008, but in terms of fastballs down the heart of the plate we are looking at roughly 100 swings versus 220. Wright's simply doing less damage on these fastballs and is also whiffing on these pitches at over twice the rate as 2008 (11.3% vs. 5%). Given Wright's overall increase in terms of missing fastballs (16% vs. 7%)--and the lost hits it creates given his high BABIP in general and specifically on fastballs (.346)--it should raise some alarm bells in terms of ageing and bat speed.

The power numbers look the same for fastballs. Wright's slugging per swing on low pitches increased by 129 points form 2008, but on belt-high pitches it's declined by over 100 points. There's been a bit of increase on high fastballs, which is good news. Overall, Wright is slugging 30 points lower per swing this year, which is still an 8% decline when you adjust for the league environment.

It should be noted that the reduction in power can't simply be attributed to the park Wright now plays in. If we map his batted balls in 2011 to Shea Stadium we don't find any fly balls or line drives that would have been home runs in the old ballpark that were outs or, say, doubles in Citi. The park may have caused him to change his approach, but the dimensions alone aren't producing fewer home runs. 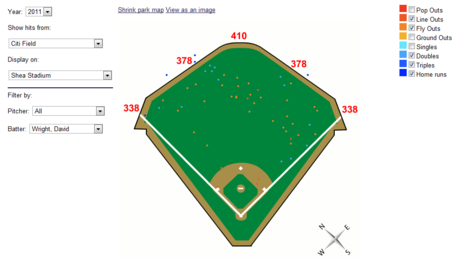 Wright's declining effectiveness on fastballs shows no signs of improving. The sharp drop we observed in 2009 is still present, and his inability to consistently make pitchers pay for middle-height fastballs is not something he can make up for in other ways. Considering his wOBA per swing has also declined on off-speed pitches and pitchers have reacted by throwing 17% more off-speed pitches, Wright's inability to make the most of his opportunities on fastballs signals that this level of production is unlikely to improve.

My biggest concern is that Wright's bat may be slowing down. Unless this is simply a function of a poor approach at the plate (causing Wright to be slow to recognize and attach fastballs), a slowing bat means that Wright's production has a slim chance of improving.

That being said, he's still consistently outperforming the average offensive player by ~25%, and given the state of third basemen in the National League there's quite a lot of value there. (Wright ranks second among NL 3B in terms of wRC+ since 2009, 5th in all of MLB). If he can get his defense back to average and suffer through a normal decline in terms of ageing over the next few years I don't think trading Wright is advisable, at least not this off-season. Just take a look at the list of free agent third basemen in 2012 and 2013. Slim pickins' doesn't even begin to capture it.

However, the lack of performance on fastballs has me worried. Normal ageing is one thing, but if it's beginning early for Wright (and slowing bat speed could certainly be a sign of that) the Mets run the risk of having a $16M league-average hitter in 2013. If they were to receive an offer for a front-line starting pitcher prospect that was near-MLB ready I think they would be crazy not to listen. Although I don't think that scenario is highly probable.

Some folks in the comments section have questioned to what extent we should trust the data since Wright suffered through a significant back injury earlier in the year. That's a fair point. I took at all data prior to July 22nd and recalculated his performance and here is what we find: 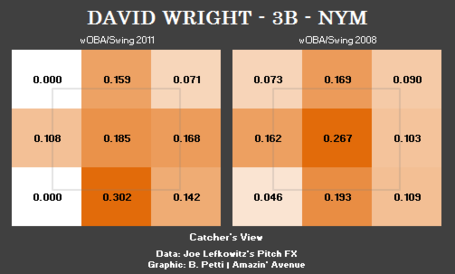 The general pattern seems to remain--less effectiveness on belt-high pitches down the middle and in. When we isolate for fastballs, it appears that his performance on balls down the middle is actually worse since returning from the DL. 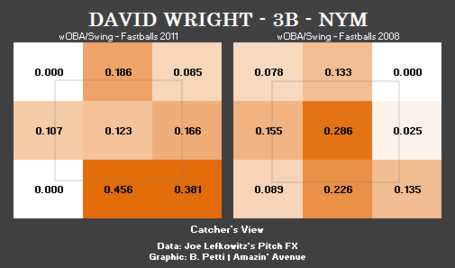 He has been absolutely destroying fastballs low in the zone, but the idea that he can't catch up to fastballs down the middle of the plate is still puzzling. In terms of his whiff rate, he's currently swinging through fastballs down that middle at a rate of 7.1% since the DL, and 12% on balls middle-in. That's still leading me to question whether it's possible a bat speed issue.