Phillies 9, Mets 4: Are You Surprised?

Share All sharing options for: Phillies 9, Mets 4: Are You Surprised? 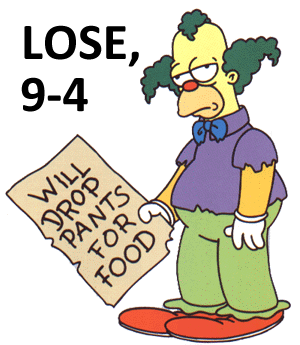 In the least surprising development of the Mets' 2011 season, the pitching matchup of Mike Pelfrey and Roy Halladay turned into a loss. Halladay wasn't particularly dominant with strikeouts but kept the Mets scoreless for six innings, and Pelfrey allowed five runs in merely three innings of work.

If Pelfrey was bad, D.J. Carrasco was atrocious. In one inning of work out of the bullpen, Carrasco gave up four hits, one walk, and four runs. The rest of the bullpen was just fine, though, as Dale Thayer, Ryota Igarashi, Pedro Beato, and Josh Stinson combined for five inings of scoreless work.

The Mets got four runs against Philadelphia's bullpen, three of them coming in the seventh inning and one in the eighth. It was, of course, too little, too late.

The final series of the season begins tomorrow at 7:10 pm with the Cincinnati Reds visiting Citi Field and Chris Schwinden set to start for the Mets. 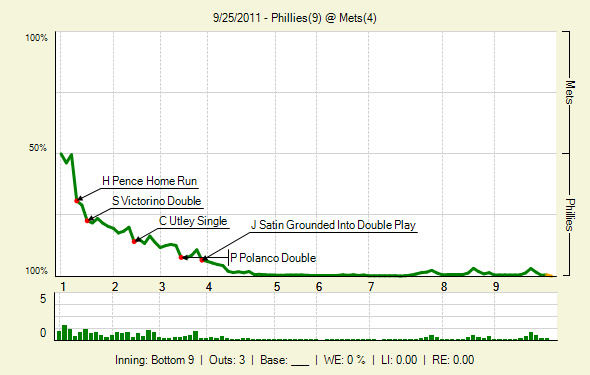