Share All sharing options for: Mets vs. Reds Saber-stat Preview 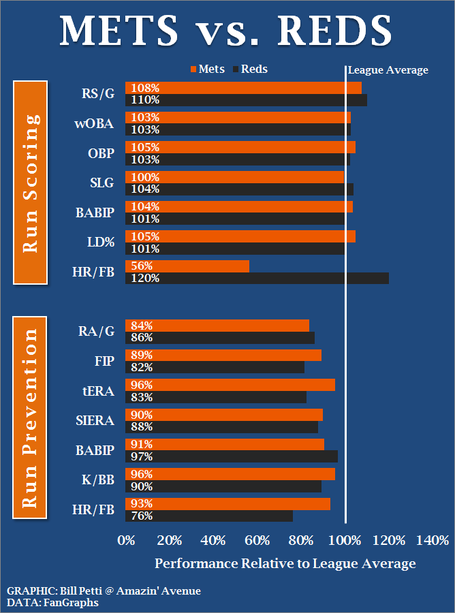 The Mets sit three games out of 3rd place in the NL East and have no shot at finsihing .500 for the year. But this is about where we should have expected them to be. Sure, I hoped they'd be a tad better than .500, but considering the injuries to Jose Reyes, David Wright, Ike Davis, the trading mid-season of Carlos Beltran, and the lack of depth in the rotation and I can't say I am dissappointed with the season.

The team has certainly taken strides, and this can most readily be seen by looking at the offense. The team scored 8% more runs than the NL average, helped in large part by being more protective of their outs. This is a step in the right direction.

The defense and pitching still leaves a lot to be desired, but the front office appears to have a plan and if nothing else their process gives me more hope than recent front offices.

That being said, there are still three games to play. The Mets and Reds are very similar teams. Above average offenses, well below average run prevention. The Mets sport the better pitching staff, but a poor defense whereas the Reds seemingly have the opposite. In either case, neither team is good at keeping runs off the board.

For more on the Reds, be sure to check out Red Reporter.