Share All sharing options for: Reds 6, Mets 5: Living in Oblivion 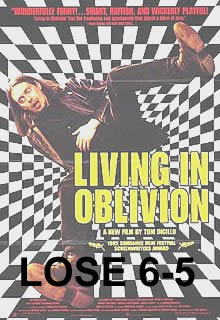 There were several games of dire import in the impending MLB playoffs. This was not one of them. The Mets and Reds began this series with virtually identical records and an equal amount of irrelevance to the postseason proceedings that will begin at week's end. The only real difference between the two is that the Reds had some expectations of competing this year, where the Mets did not. Cincinnati's season pretty much tanked after the Mets swept a four-game series at Great American Ball Park, while the Mets' did the same immediately thereafter.

And now here they both are, forced to play these games for pure bookkeeping purposes. Everyone involved seemed to act accordingly. Even home plate umpire Tim McClelland's languid ball/strike calls indicated that it was not worth expending too much effort in this contest. His lackadaisical approach was an alternating source of frustration and bemusement to the SNY crew all game.

Brandon Phillips led things off against Chris Schwinden with a long double to left field; Willie Harris did not play it well, though it's doubtful he could have caught the ball even if he had. But that was fine, because Phillips didn't have designs on more than a double anyway. And in any case, he moved to third on an Edgar Renteria sac bunt and scored the first Cincinnati run on a Joey Votto sac fly.

Then in the second, after retiring the first two Reds easily, Schwinden made a poor play on a bouncer by Dave Sappelt, allowing him to reach on the error. The speedy Sappelt stole second and scored on a double into the gap by rookie Devin Mesoraco, putting the Reds up 2-0.

The last time the Mets saw Homer Bailey, they did a number on him. But that was in Cincinnati at the end of July, and much has changed since then. They were unable to take advantage of two hits in the bottom of the first, as David Wright and Nick Evans struck out to waste a scoring opportunity, then went down in order in the second.

The Mets struck in the third, when Jose Reyes and Ruben Tejada hit one-out singles. After a Harris fly out, Wright smacked a single up the middle to plate Reyes, then Evans belted a double into the right field corner to score Tejada and Wright, giving the Mets a 3-2 lead.

The Reds came back in the top of the fourth, thanks to some more unfortunate fielding. Chris Heisey laid down a one-out bunt that Wright fielded but threw well past first (though it was doubtful he would have had the runner anyway). Heisey put himself in scoring position with a steal of second, then scored the tying run when Sappelt hit one in the 5.5 hole.

The Mets responded in the bottom half when Jason Pridie hit a ball over Jay Bruce's head and into the Mo's Zone, which he was able to leg out for a triple. Curiously, Bailey pitched carefully to his opposite number and walked him. (Even more curiously, Schwinden had little idea he'd watched ball four, thanks to McClelland's narcoleptic approach to umpiring.) That allowed Reyes to hit a ball well to right-center for an RBI sac fly, putting the Mets back on top. 4-3.

After an uneventful fifth, the Mets turned to pint-sized reliever Daniel Herrera, who promptly retired no one. He gave up a single to Heisey, saw another single clank off of Evans' glove (after he'd just been moved to first for defense), and watched Sappelt lay down a perfect bunt to load the bases. (It was curiously ruled an error because Wright failed to pick it up, but there was no way on earth he could have thrown out the runner.)

Collins made the call for Ryota Igarashi, which is usually your signal to change the channel, lest you witness carnage untold. But Igarashi got some help when Mesoraco swung at the first pitch and popped up. He then struck out pinch hitter Yonder "Lies Da Castle of My Fathah" Alonso*, and got Brandon Phillips to bounce out to second and escape unscathed. No, I wouldn't have believed it if I hadn't seen it either.

The Mets bypassed another scoring chance in the bottom of the sixth when Chris Heisey made a great catch on a drive off of Wright's bat, stranding two runners. They paid for it in the top of the seventh, as Tim Byrdak, brought on to get out the lefties Votto and Bruce, retired neither. Josh Stinson came in and watched his first pitch get belted by Heisey into left field for a three-run homer.

The game carried on its listless fashion until the bottom of the eighth, when Mike Baxter worked a one-out walk against Jose Arredondo. Reyes followed with a double down the right field line that allowed Baxter to score all the way from first. It was Reyes' third hit of the day, pushing his batting average to a league-leading .334. Unfortunately, he ventured too far off of second base and was tagged out on a relay throw. Tejada singled to left, a hit that would surely have drive in Reyes with the tying run had he not been watching from the dugout. The Mets compounded their trouble when Tejada unwisely tried to steal second and was thrown out to end the inning.

In the bottom of the ninth, the Mets put up a threat when Willie Harris doubled over Bruce's head, and Wright took first after sustaining a scary-looking hit-by-pitch. ("Shades of Matt Cain," as Gary Cohen.) Of course, this was the time for BUNTZ! With your #5 hitter! Even when he's ahead in the count 2-0!. Nick Evans laid down a perfect bunt toward third, so perfect that the Reds easily got the force at third. Josh Thole proceeded to bounce into a double play, and that's all she wrote.

A win would've been nice. The loss feels only a little bit bad. Everything is numb this time of year, when your days are numbered. Philosophical question: Would you rather the Mets be where they are at right now, or going through what the Red Sox are at this moment? Me, I think I'd rather be tortured with a chance than go gently into the night. Then again, back in 2007, I had full blown panic attacks about this team. There has to be some middle ground, doesn't there? 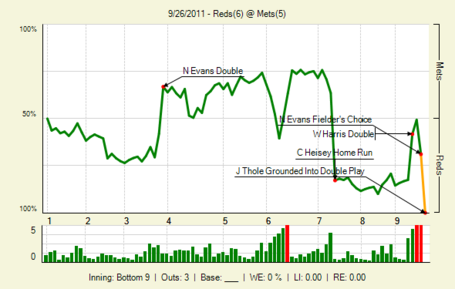 Nice job by MetsFan4Decades; your effort in the game thread embiggens us all.