Share All sharing options for: This Week In SNY, Featuring Deep Thoughts With Tim Byrdak, Burkhardt The Jinx, And Gangbanging Tim McClelland

This final 2011 edition of TWISNY was produced at home base, just outside SNY Studios in Midtown Manhattan. 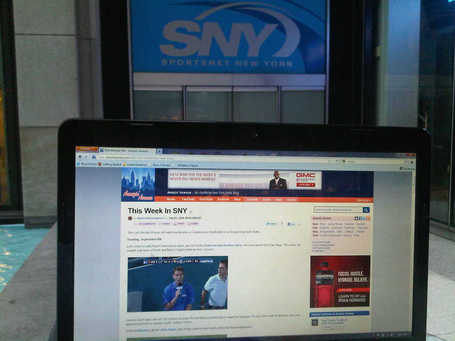 Security let us stick around long enough to write the whole post. 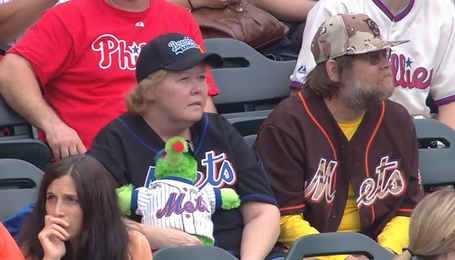 Quoth Ron Darling: "That is wrong on so many levels." Gary Cohen added "That was really odd." TWISNY can understand the fashion statement made by the bearded fan, but an explanation is needed for the Phanatic in the Mets jersey. Is it a voodoo doll? If yes, why put a Mets jersey on him? Why not dress him in a Jimmy Rollins jersey? So many questions which will forever be unanswered.

Let's check in with Kevin! R.A. Dickey had a no-hitter going in the seventh inning and Kevin let his 21,000+ Twitter followers know:

Kevin is a notorious jinx -- would he strike again? Yes, as Dickey gave up a double to Satan Victorino after 6.1 no-hit innings. The peanut gallery gave Kevin the business, and he was having none of it!

99.99 times out of 100, TWISNY does not believe in ghosts, spirits, curses or jinxes. But forgive us for holding on to the "don't mention 'no-hitter' during a no-hitter" policy.

Tim Byrdak had a rough night against the Reds and sat in the dugout afterwards with only his thoughts: 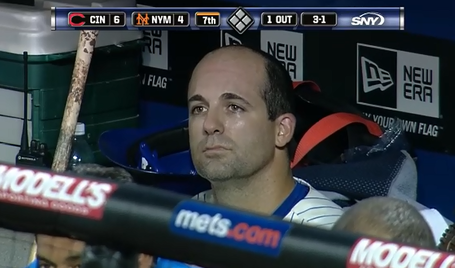 "I'm staring at a star in the sky, wondering if maybe, just maybe, Pedro Feliciano is looking at the same one."

Tim McClelland flashed the symbol of his gang "The Madison Boys", which pays tribute to the fourth President of the United States: 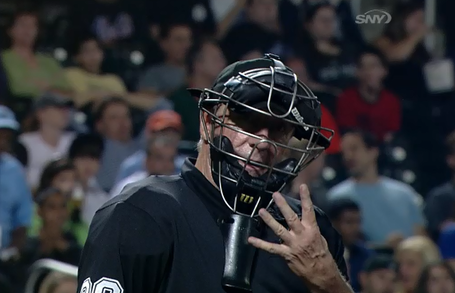 It took all of our strength to not troll this text poll with a barrage of "NO" responses: 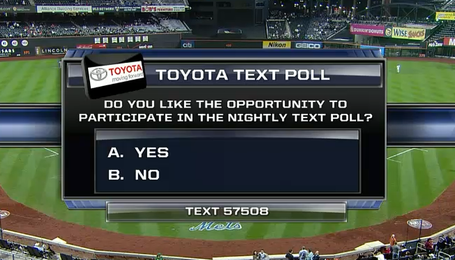 The texters came through, validating the existence of the Toyota Text Poll: 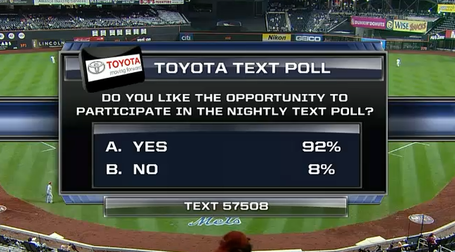 Left to right, we have some late night iced coffee, the gun show and disapproving Gary: 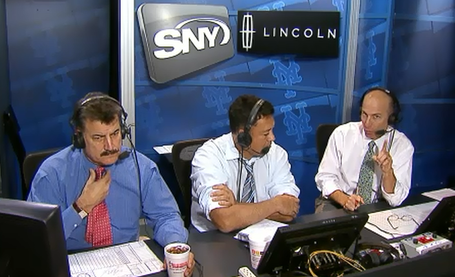 And here's Ralph Kiner to cap it all off, with a bonus shot of Ron Darling sitting in the high chair: 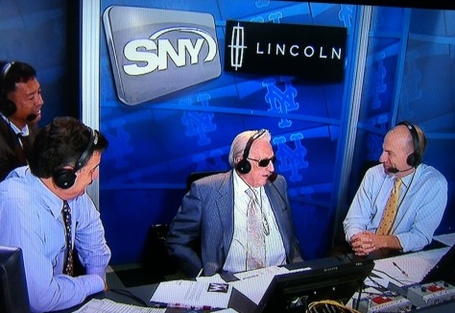 TWISNY extends a sincere thank you to Gary, Keith, Ron and Ralph (okay, Kevin too) for yet another great season. We can't imagine watching the Mets without them.

That's all for this season. We'll be back sometime soon with a "best of" season in review. Thank you for reading.